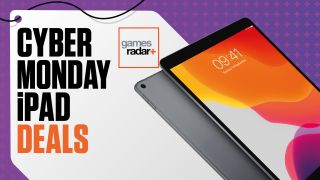 Such is the sales period nowadays, we don't actually expect the Cyber Week iPad deals to start tailing off until the latter end of this week, probably this Friday, December 6, so you may have a little time on your side. Regardless, this page will be consistently updated throughout the week with the best US and UK Cyber Week iPad deals as they appear, so make sure you check in whenever you get the urge to pull the trigger on a new slab.

As for what we'll be focusing on here, you'll find the best and cheapest deals below on the new 2019 iPad model, the latest iPad Mini, and the most recent iPad Pro. Having said that, the quality of iPads is such that slightly older ones which are fast become more and more affordable are great still too, so, with all iPads being fair game, you may well see some of them crop up if the deals are good.

iPad 10.2" 32GB (Wi-Fi) | $249.99 at Best Buy (save $80)
While not the fastest iPad available, the cheaper range still offers a versatile device perfect for browsing the webView Deal

iPad Mini 64GB (Wi-Fi and Cellular) | $329.99 at Best Buy (save $200)
Huge savings on a little iPad, and with 64 gigs and cellular connectivity, this is a stand-out Cyber Monday iPad deal.View Deal

If you've been looking to upgrade, the latest model has the newest features and a bigger screen than previous iterations. It's only a minor upgrade over last year's - so bear that in mind when comparing prices - but Apple Arcade and the upcoming Apple TV make it easy to justify a new tablet.

The iPad Mini is the perfect solution for anyone who likes reading or gaming on their tablets but doesn't want to be carrying a huge slab of glass in their bag. The 2015 iPad Mini 4 finally received a brand new update in 2019, simply called the iPad Mini, getting a brand new A12 Bionic Chip and a new retina screen with a 2048 x 1536 resolution.

If you're using your iPad in any sort of professional setting, all just like to have more power under the hood, the iPad Pro offers the most horsepower for your hands. A new new A12X bionic chipset makes it - according to Apple - faster than 92% of other portable PCs. It's not the cheapest option, but it is a damn impressive one.

What is a good Cyber Week iPad price?

That very much depends on the iPad model you want to grab. Apple updates its tablets so often that, if you can live with a 2018 model over a 2019, you can score even bigger discounts. If you just want something for Facetiming bae and checking out Apple Arcade, then Apple's 2018 9.7-inch iPad will work just as well as a 2019 model, but will be more likely to see a big discount.