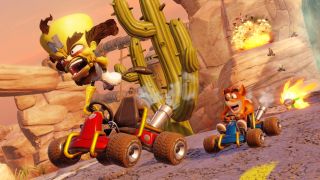 'Lush’ is really the best way to describe the worlds in Crash Team Racing. Yes, worlds – they’re so good-looking that simply calling them tracks doesn’t feel like you’re doing them justice. They’re the kinds of places that make you want to pull over on the side of the road so you can get out and just take it all in. If that wouldn’t get you bombarded by a bevy of missiles, explosives, and magical spirit masks, that is.

While the tracks in the original Crash Team Racing were incredibly inventive, in this remake they’ve been truly brought to life by Beenox, the game’s developer. Wonderful details have been added, making the racer feel more like an extension of the Crash platformers than ever before. You can almost imagine the bandicoot himself crunching over the beaches of Crash Cove or slipping across the ice in Polar Pass, and Dingo Canyon feels like it would be right at home in Crash Bandicoot 3. The tracks have been filled out, peppered with little references to the rest of the Crash games. Each starting line is decorated with something unique, such as a polar bear struggling to stay balanced on it in Polar Pass.

And it’s not just the other racers who are out to are spill your oil, the tracks themselves are too. They feel almost alive, and you need to watch out for crumbled pitfalls and criss-crossing wildlife as much as the other karts. The Crash series has always required a certain degree of finesse, and that’s still the case when you get inside a kart. The tougher tracks feel just as unforgiving as the best nail-biting levels found in the platformers. To think of Crash Team Racing as being completely discrete isn’t quite right; it’s cut from the same cloth as its platform siblings. Crash is as Crash does – and that’s chaotic mayhem, whether in his big red shoes or his shiny motor.

Having played the original Crash Team Racing pretty much to death back on the PS1, it’s only natural we’re combing over everything in our hands-on to death too, playing each track over and over as every one of the eight characters. While in the full game you’ll be able to customise your karts, we’re confined to the default models for now – though as in the original, each character handles differently, with stats for speed, acceleration, and turning. Who you’ll want to play as depends on what you’re comfortable with. We love having good corner control, so we can hit as many boosts as possible.

As well as performing differently from one another, each character looks unique. Just as the tracks are now more detailed, Beenox has used the power of PlayStation 4 (the game is also set to launch of Xbox One and Nintendo Switch) to put in all the little things that add up to a massive amount of personality, from super-huggable fur on the animals (we want to bundle Polar up in our arms) to quirky animations as your racers hurl weapons at their race rivals, and have things hurled at them in return. Jumping off ramps you can perform a trick – one that conveys your chosen driver’s personality – to earn a small boost, and all the game design oozes that level of charm. Beenox is doing as good a job of capturing the orange growler’s magic in Crash Team Racing Nitro-Fueled as Vicarious Visions did in the Crash Bandicoot N.Sane Trilogy.

Even though we’re familiar with the original Crash Team Racing, it’s almost a surprise how similar Nitro-Fueled feels to play when it couldn’t look more different. If you’re expecting a big change-up in the on-track action you’d be wrong. Mechanically, everything is pretty much just-so. This is no reinvention of the Crash racing wheel, though in many ways that’s a great thing for a remake like this. As enjoyable as some of the later Crash racing games were, they never captured that feel of the original PS1 game like Nitro-Fueled absolutely does.

The accuracy of the retro gameplay does mean you might find Crash Team Racing harder to get into than some more modern kart racers – it could surprise anyone expecting to be able to pick it up and cruise to the winning trophy. There are some fiddly technical elements. For example, you can hold the brake to glide around tight corners, and if you hit the shoulder button at just the right time during your drift, you’ll get a boost. You can chain up to three of these if you hit it at the right moment every time – though try too early or hold too long and you’ll lose your chance. It can take some getting used to.

Like in the original, there’s a meter in the bottom-right that indicates your charge level, as well as a smoke indication on your kart – though with so much more going on in Nitro-Fueled than in the original it’s harder to pay attention to this, so you might be better off just feeling things out. This meter is also used to give you a starting boost on the line. Like drifting, tricking off a ramp requires precision as you need to tap the jump button just before you hit that ramp. It’s something you get used to, and learning a track’s obvious and slightly less obvious places to grab some air means you can boost all over the place, but it doesn’t give you a huge amount of leeway.

As the hops and drifts are mapped to the same shoulder buttons, you need to make certain you’re hitting the direction you want to drift when you press, otherwise you might end up doing a little hop instead or drifting the wrong way. The game might be cartoony, but you need a certain amount of precision to succeed. But that’s because that’s the way it is in the PS1 original, which has been recreated with an eye to true mechanical faithfulness.

Everything you need to know

That need for precision does make it rewarding when you know how to control your character, when you can hit those level three drift boosts, and pull off those trick jumps. Even if you didn’t have to worry about the other racers there would still be quite a bit of challenge in trying to perfect your runs. But you do have to worry about the other racers. Quite a bit. That’s thanks in no small part to the litany of weapons and power-ups scattered around the track.

Crates are the backbone of Crash Bandicoot. They hide all sorts of goodies in the platformers, so are obviously perfect for use as weapon receptacles in the kart racing game. In fact, they might be the most perfect means of receiving a kart racing weapon in any game ever.

Driving into a crate gives you the same satisfying crunch as in the platformers, but with a more diverse arsenal to take advantage of. All the weapons you’d expect from the original are here, and they’re much as you’d expect from a racing game: TNT crates to drop behind you, shields; homing missiles; and bowling ball-like bombs. Most can be directed either in front or behind you.

The biggest twist is that after you collect ten Wumpa fruits – they’re littered around the track – you power up the weapons you collect into a stronger variant. TNT, for instance, detonates after a timer, just like in the platforming games, but with ten Wumpas you’ll be given a Nitro crate instead, which detonates instantly. So make sure your racing line coincides with your ten-a-day. In Crash Team Racing Nitro-Fueled it really does pay to think smart and make sure you have the practised skills to pull off exactly what you want to do – boosting all over the track and collecting a suite of superpowered weapons. Though that does also mean it’s not the sort of game where it’s easy to pull up to the front of the pack again if you fall behind.

Getting behind the wheel of Nitro-Fueled reminded us just how unforgiving Crash Team Racing sometimes felt, but also how addictive the madcap antics got. Because so much of this game revolves around learning how to be better, you find yourself wanting to try again and to challenge yourself to reach that next level. Playing local multiplayer is sure to revive that feeling of everyone wanting salty runbacks, with squeals of delight and frustration to match. And with an online mode being added, the anguish can go on for as long as your tortured heart desires.

Given how closely Beenox has managed to capture the feeling of the original, we have a pit in our stomach remembering devious challenges of the past, which we are sure await us once more in the Adventure portion of the game. But we’ve yet to rev our engines to the game’s story mode; for now, our test drive around a range of tracks has us satisfied. If you’re a fan of Crash Team Racing, you can rest easy – you can feel Beenox’s love for the original in every chaotic lap.

Whereas Crash Team Racing Nitro-Fueled is sticking to its original guns (or original engines, I guess), Team Sonic Racing is aiming to be a co-op racer like never before. Find out about the development from its director Iizuka-san here!