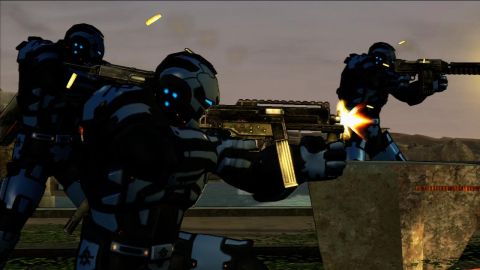 This was our biggest problem with the original Crackdown. When you were messing around and improvising gameplay with friends, the game was a blast. When you eventually attempted to finish the campaign and check off all of the official objectives, however, the game became a repetitive and unimaginative chore. Why were we, the amateurs, so much better at thinking up cool stuff to do than the experienced developers?

Sadly, and a little shockingly, the missions are just as bad in Crackdown 2. Instead of taking down a series of forgettable gangs, you're slowly rebuilding a forgettable super weapon in order to eradicate an army of forgettable zombies while being harassed by a forgettable resistance force. Honestly, even with our snark added, that last sentence makes the campaign sound pretty damn interesting, so here's an actual example of gameplay to put things in perspective:

You rebuild the super weapon by… standing? Yup, only multiply that image by 27, because that's the number of super weapon pieces you'll be asked to repair in the same tedious manner. Occasionally, you'll be told to activate a beacon as well. Those missions undoubtedly look like this:

You drop down a dark hole and protect the beacon from a relentless swarm of zombies for several minutes. It's exciting and intense the first time… not so much the ninth, nearly identical time.

And everything else? Clearing out zombie and resistance force strongholds. In other words, pretty much what you did in the last game.

With some nice diversity and a beautifully crisp, cel-shaded comic book style, however, Pacific City was good enough for the first game. Then on to a new and improved setting for Crackdown 2, right?

Sorry. Same city. Same landmarks. Same basic layout. Pacific City has fallen into crumbling disrepair since the previous game, and while we did enjoy recognizing certain landmarks in their slightly more deteriorated states, that's seriously the only noticeable difference. And that is not enough of a difference to make Crackdown 2 a truly new experience.

Of course, the other drawback from barely upgrading a location after three years of technological advancement? It starts to show its age in incredibly distracting ways…

That's not a cable or rope lying on the beach. That's two polygons of beach texture sewn together with their stitches showing. Welcome to 2010.

He's back, and bossier than ever. Your Agency employer / handler was the sole character in Crackdown, compensating for his mysterious lack of a face or name through the constant use of his smug and condescending voice. But at least he usually had something helpful to say about the mission you were tackling or the vehicle and weapon you were handling. And once he was finished, he shut up.

Not in Crackdown 2. Trying to fight off enemies? He'll ask why you're taking so long. Trying to defend a beacon from zombie attacks? He'll interrupt every 10 seconds to remind you that - no shit – zombies are attacking the beacon. Trying to escape a danger zone with a sliver of health bar left? He'll order you to return once you've "grown a pair." Trying to drive down a street, but accidentally hitting a few policemen because they're almost indistinguishable from every other NPC? He'll send attack squads after you as punishment, and say so with the exact same snippet of dialogue he used in the original game. Trying to stand still so you can temporarily take care of something in the real world? He'll angrily bark at you to "get a move on!" He's a mean old bully, and we hate him.