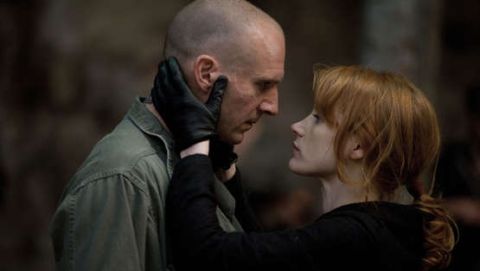 If you only know Ralph Fiennes as a Nazi or wizard, book yourself a theatre ticket asap. Far from the buttoned-down brooders of his screen holding pattern, on stage he really lets rip. The man has such a pair of lungs on him he could launch a sideline in training freedivers should the roles ever dry up. So Joe’s big bro is a safe bet for one of Shakespeare’s meatier, if less well-known roles.

Trepidation could be forgiven, though, this being (A) Fiennes’ first film as director, and (B) an adaptation of a play that predates movies by some 300 years and has never been a favourite of Bard aficionados.

Fiennes and The Hurt Locker DoP Barry Ackroyd have clearly been mainlining Children Of Men , updating the play to “a place calling itself Rome” that resembles ’90s Serbia.

We’re presented a war-crushed state that reaches out to conquering hero Coriolanus to lead them – and in an early, brutally staged knife fight, he proves his credentials. This fiery general’s contempt for his people doesn’t go down well, though, and he’s soon deposed – promptly joining the rebels he’s been quashing. A dick move? Sure. He’s no dreamboat Romeo or witty Hamlet.

What he is, though, is a terrific character, and Fiennes tears into him with gusto. Old pros Brian Cox and (in particular) Vanessa Redgrave also bring a lifetime of skill to bear as a wily politician and Coriolanus’ fiercely patriotic mother, but some of the more naturalistic verse-reading lower down the bill sits awkwardly with their elevated styles.

Still, because the play’s so rarely taught or performed, Coriolanus feels like discovering a whole new Shakespeare work. And what’s not to love about that?