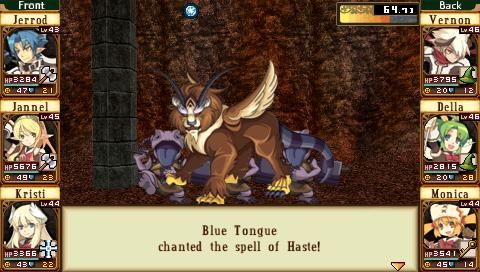 Atlus continues to emphasize the ‘J’ in JRPG with Class of Heroes, a first-person dungeon crawler that seems to emphasizes accessibility - with a side of cuteness - over the brutal difficulty level seen in other recent releases from Atlus, like Etrian Odyssey and The Dark Spire.

Class of Heroes follows a pack of students through Particus Academy, a school for young adventurers. Think of it as the JRPG equivalent of Hogwarts School of Witchcraft and Wizardry from the Harry Potter series. You’ll choose majors to study, synthesize armor in the laboratory, and hunt for new quests in the dusty halls of the library.

The quirky world is fleshed out nicely, but the focus of the game is on dungeon exploration – and that’s a good thing, because adventuring through Class of Heroes’ labyrinths is incredibly addicting. These dungeons sport impressive layouts, and are filled with obstacles and traps. You’ll have to contend with challenges like shock tiles that zap your party for damage, or warp points that unexpectedly send you back to the entrance. It sounds frustrating, but these traps actually have the opposite effect, and encourage you to give in to the temptation to explore every dark nook and cranny.

But what about the combat? At its most basic level, Class of Heroes works like most traditional turn-based RPGs. Still, the game manages to put a twist on the norm by grouping your allies and foes in rows, with melee characters taking care of the hacking and slashing in the front row while ranged units deal damage from a distance.

It’s interesting enough to hold your attention at first. Unfortunately, after short spurt of level grinding, which you’ll likely do anyway out of habit, battles become so easy that it’s hard to enjoy the combat system when all your foes topple before your forces like a flimsy house of cards. After a while, battles become so easy that they eventually devolve into little more than annoying roadblocks that slow down your joyful exploration of the dungeons.

For anime and JRPG lovers, the original Japanese voices and crisp art style will be welcomed with open arms. But gamers who roll their eyes every time they meet a new spiky-haired hero with a gigantic blade won’t find Class of Heroes’ traditional anime-ish look and sound as appealing.

Class of Heroes delivers some quality dungeon crawling, which will wake up the back-tracking, corner-hugging, poke-at-everything completionist within you. Unfortunately, the game strays too far into the casual realm when it comes to combat. It’s simply too easy for its own good, which slightly sours what might’ve been an awesome JRPG.