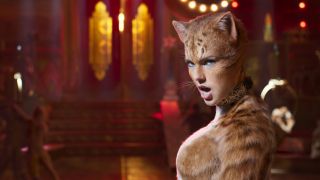 Is Tom Hopper’s 2019 showing a purr-fect re-telling of the classic musical? Not quite. The reviews for Cats are here and they range from a-mew-sing to being a whisker away from outright murder. If you’re curious or just want a second (third, fourth, and fifth) opinion, feel free to lap up the Cats reviews below in our round-up.

First up, our own Cats review, courtesy of sister publication Total Film.

“Hard to fathom is why the moggies’ dimensions in relation to their surroundings shift from scene to scene and why more wasn’t done to make the loquacious lyrics – derived from TS Eliot’s playful pussy poetry – even moderately comprehensible. Cats, in short, is a weird mind-scrambler of a film whose eye-frying visuals and downbeat tone are constantly at odds with Andrew Lloyd Webber’s exuberant melodies.”

“Notwithstanding the raggedy costumes, the stage show always had the warmth of human presence (not to mention startling anatomical explicitness), heightened by the immersive staging. Such heavy CGI tinkering takes that all away. Yet these cats are never even momentarily plausible as cats either, obviously. Rather they seem to be grotesquely deformed human beings. There are moments when this film seems not so much an adaptation of a nonsense classic as a horror story, nearly as obscene as The Human Centipede.”

“The twitching of ears on their heads is distracting
As they gaze at the greenscreen and sashay and crawl,
It’s weird to behold them all gurning and acting,
And why do so many resemble Darth Maul?
Did director Tom Hooper intend this appearance?
Did it make him feel happy – or cause him some stress?
We have to assume that he gave it his clearance
But THE MAN HIMSELF KNOWS and will never confess.”

“The harsh truth is the film feels plastic, it has no heart or soul. That might well be a problem with the source material and its suitability for a transfer from stage to screen. Notwithstanding notable successes, the fact is not everything that is a hit in one medium works in another.”

“The new addition to the soundtrack, “Beautiful Ghosts”, written by Swift and Lloyd Webber, is instantly forgettable. Most frustratingly, it manages to yank the spotlight away from the genuine centrepiece of Cats: “Memory”, sung here by Jennifer Hudson. In another world, Hudson – like Anne Hathaway as Fantine before her – might have won an Oscar for her raw, snot-drenched performance, as the camera hovers as close to her face as possible. It would be beautiful, if only the whiskers sprouting out of her face weren’t so distracting.”

“The characters look more human, and the movie is better off for it, though still a little unsettling. (Just when you think you’ve reasonably settled into the uncanny valley, Idris Elba’s coat comes off and you’re sucked even deeper into a void of horny confusion.) The hoopla over the trailer put Hooper in an awkward position, because if Cats is not completely weird, can it rightfully still be called Cats? It’s not my favorite musical by a long shot, nor is it even Lloyd Webber’s best. But Cats’ uncoolness, its willingness to be silly and self-serious and spectacular at the expense of taste, is its greatest strength, and Hooper’s version understands this.”

Cats isn't the only film coming to theaters this week. Find out what's showing next in our movie release dates guide.