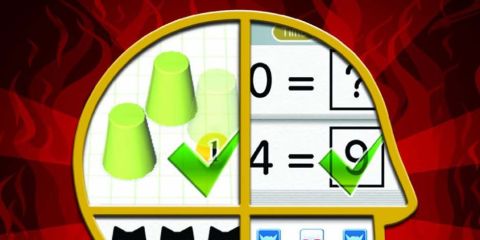 Brain Age was one of the DS’s more unlikely hits, a mass-appeal edutainment game inspired by the research of preeminent neuroscientist Dr. Ryuta Kawashima. The latest title, Brain Age: Concentration Training, takes the foundation laid down by the DS game and expands it with a handful of challenging new exercises and features, making it the best installment in the series yet, and a must-have for fans of puzzle games.

The object of Brain Age is to sharpen your mental facilities by doing a series of brief brain-teasing exercises, which can range from simple calculations (albeit at a rapid-fire pace) to memorizing images. Concentration Training differs a bit from previous Brain Age titles in that it focuses more on improving your working memory than on decreasing your mental age. However, the core gameplay remains largely the same, with minigames that are gradually doled out to you as you complete your training.

Fortunately, this gameplay is still a lot fun, and it’s wrapped up in a much nicer coat of paint this time around. While the original Brain Age felt very sterile thanks to its minimalist presentation and its low budget, Concentration Training is much more inviting; Dr. Kawashima’s lectures are accompanied by charming illustrations and diagrams, and the doc himself is fully voiced, explaining the rules of each exercise and commenting on your progress. The game even keeps a record of your achievements as you improve your scores, giving you tangible goals to strive for each time you play. Together, these tweaks go a long way in making the game a fuller and more personal experience than the Brain Age titles before it.

The most notable addition to Concentration Training are the new “devilish” exercises, a series of fiendishly tricky minigames designed to test the limits of your memory. Unlike regular exercises, each devilish game lasts for a full five minutes and is constantly adjusted based on your progress. Meet or exceed a certain percentage and the difficulty will increase accordingly, but fail and you’ll be bumped back down to an easier level. As you’d expect, these exercises become challenging very quickly, but they’re all nevertheless satisfying to play, especially when you see yourself improving with each session. These exercises are also complemented by a handful of other minigames designed to keep your brain active (some of which have been recycled from the previous two installments), as well as several light “relaxation” games for when you need a breather from your training. Players of all stripes will have plenty to enjoy in the title.

Unfortunately, a few mechanical issues do crop up in Concentration Training. The handwriting recognition, while generally spot-on, can be a little wonky at times. It’s never bad enough to impede the gameplay, but in certain exercises like Word Attack, which has you memorizing a word and writing it out as quickly as you can, having to rewrite a letter because the game misinterpreted it will add precious seconds to your score time. Likewise, the voice recognition, while generally pretty accurate, can also be a bit finicky at times. There will be instances, particularly during Devilish Words (an exercise that has you reading sentences aloud), when your voice won’t immediately register, forcing you to read the selection again. It’s certainly not a major issue, but it is an annoyance nonetheless.

If you enjoyed either of the previous Brain Age titles, or are genuinely interested in toning your brain muscles, then you’ll certainly love Brain Age: Concentration Training. The game features a nice array of fun and challenging mental exercises that will push your working memory to its limits, and its improved presentation makes the whole experience much more personal. It may still resemble more of a utility app than a proper game, but that doesn’t mean it isn’t still a lot of fun in its own right.