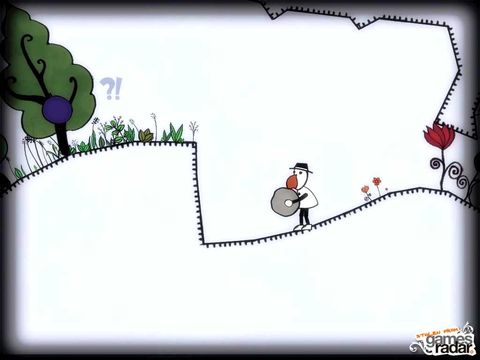 Cat crapped in your slipper again? Hate your job at the box factory? Put away the scotch, mop up those giant man tears and visit a place where everything is pretty, gentle and wonderful. In fact, if you can ignore the flood of water rising at a worrying rate, it’s heaven. Welcome to Blueberry Garden.

Unfortunately, someone left the tap on in this quirky paradise, and you need to turn it off. You’re the dude with the beak, and your skills are flying and eating things. To get to the tap you need to use that skill set to find the various big objects, (torches, tomatoes, cameras) lying around the world, which will slowly form a tower as you discover them. That tower will eventually provide you with a leaping-off point high enough for you to get to that tap.

It’s a simple enough undertaking, and in theory you can finish it in 30 minutes, but that basic goal doesn’t do the game justice. It’s not about finishing (though the ending is as unexpected as the world), but more about flying through the scenery, exploring, stumbling across giant pencils, blocks of cheese and surly looking snails. This isn’t a game for people that like high scores and strict objectives, more like a playground for your curiosity.

While we don’t want to ruin the sense of discovery for you, it’s worth knowing there are different types of fruit growing throughout the garden, and they all have specific powers to help you in your adventure. The berry powers offer a mix of traditional platform power-ups, such as better flight, alongside some literally world-changing abilities.

And no, we’re not telling you what they are: this short game is all about the process of figuring out for yourself how the world reacts. However, a few tips should suffice: if you drop a berry on the ground, it turns into a seed and sprouts a new plant, providing you with an endless supply. Also, get stuck, or need to get back to the tower with a fresh new berry? Just press the Home button to go, well, home.

You’ll find the rest out for yourself, just by wandering around, trying things out and seeing what happens. The game gives you only the most basic instructions - anything other than the controls is up to you to find out as best you can.

Add to that a piano soundtrack that makes you feel as though you’re being serenaded, and a hand-drawn style that makes you think of children’s books, and it’s so beguiling it’s easy to forget there’s a torrent of water rising steadily, threatening to drown you like the runt of the litter. This is a real indie gem, and at just a few bucks, it’s also way cheaper than a trip to the therapist.