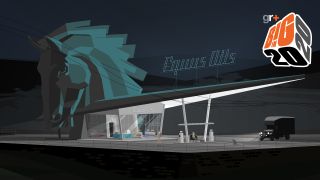 "I think we all feel really lucky that it's caught on for so many people and so many people can relate to it and have felt passionately enough about it to stick with us all these years as we kind of limped to the finish line to try and wrap it all up," Cardboard Computer's Jake Elliott reflects.

Every time the team has retreated into isolation, insisting that the game will take as long as it takes, we've all been content to wait, knowing they will deliver. "We can take a little time between them to kind of re-centre ourselves and let each episode grow into the scale that they need to be," Elliot says. In the longer gaps, we've forgotten about it entirely. Then, with little fuss or fanfare, a new act would appear, kickstarting a flurry of excitement as we all try to digest and comprehend the surprises, ideas and powerful emotional resonances that each piece of this narrative puzzle has delivered. This year, with the story brought to a conclusion and the piece as a whole ready to be dissected as a complete work, we'll have plenty to reflect on.

But let's rewind a bit. Part of the reason we're looking forward to the release of Act V of Kentucky Route Zero on January 28 (for PC) is that this will coincide with the release of TV Edition of the game, bringing the complete series to PS4, Xbox One and Switch and, therefore, a whole new audience. You may well be one of those people who has heard the tone of reverence with which Kentucky Route Zero is discussed, but are none the wiser about exactly what this thing is. Allow us to help.

The game kicks off with an antiques delivery driver named Conway arriving at a petrol station. He has one last delivery to make and he's got to get to Dogwood Drive to make it. To do so, you must help Conway find the mysterious highway known as Route Zero. What follows is a surreal, magical realist journey through abandoned mines, brutalist bureaucracies, computer-infused caves, and dive bars via roadways, interstitial non-places and riverboat trips.

On the way, a group of lost souls gather, among them, a struggling TV repairwoman named Shannon and a young boy named Ezra. In the ongoing search for Dogwood Drive, there's a sense that they are – each lost, incomplete and troubled in their own way – all searching for something else. We grasp for meaning with them.

Provisionally then, this is a point and click. But there are no puzzles. There are choices to make, but not always in the sense we are accustomed to. Choices often feel like they are about how you as the player interpret something, or even which lines have the most aesthetic appeal or thematic resonance, placing you in the role of co-author, rather than making a decision while embodied in the role of a character. It is a fascinating approach to storytelling in games.

Indeed, we have the advantage of knowing that this game will be one of the most talked about of 2020, because we've seen the attempts to pick its approach apart before. Every new episode has sparked discussion on some intriguing element of the game: aesthetic style, representation of space, its haunting melancholy, the beautiful musical set-pieces, spirituality, narrative experimentation, architectural influences, theatrical inspirations, and the list goes on.

This is a game that is just opaque enough to allow us to draw all of these things out of its narrative, thematic and aesthetic richness without collapsing into being meaninglessly vague. As many interpretations as it supports, it is impossible to deny its commitment to exploring the tragedy of economic precarity, for example. This is a reflection of how thoughtfully constructed Kentucky Route Zero is and explains just why it has taken so long to get to this point.

We can't wait to have those discussions again and to see how its conclusion might shed light on all the bits and pieces we've been pulling out and talking about over the course of these last seven years. The team at Cardboard Computer has been flexible, but has always known where they wanted to go, which gives us hope for a satisfying ending. "We keep the outline that we have pretty open ended," Tamas Kemenczy tells us. However, he says, "the outline, from the beginning, had a specific end".