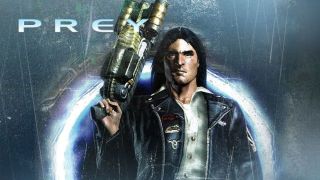 Bethesda is opening a new development studio in Madison, Wisconsin to work on "unannounced projects." It's called Roundhouse Studios, and while it's technically a brand-new entity, it will largely be staffed by former Human Head Studios employees.

Human Head is probably best known as the creator of the original Prey - not to be confused with the 2017 reboot by Dishonored developer Arkane - as well as the Rune series. It also played a support role on several games, contributing art for Just Cause 3, Wii U port support for Batman: Arkham Origins, and everything from combat to level design assets for BioShock: Infinite, among other things. As it happens, Human Head was also tapped by Square Enix for The Quiet Man, which proved to be a once-in-a-generation trainwreck. The studio's most recent game, Rune 2, was released… yesterday, November 12 on the Epic Games Store. Huh. That's quite the turnaround for a sort-of re-opening.

"Sadly, we had to wind down the business of Human Head Studios and close its doors, which was particularly devastating due to the passion and creativity of the team we’d assembled," explained Human Head co-founder Chris Rhinehart, who's now creative director at Roundhouse. "We reached out to our friends at Bethesda for help, and they saw that same creativity and passion in our team. With the formation of Roundhouse Studios, Bethesda offered every employee of Human Head a position at the new company."

We only have "unannounced projects" to go on, but it's reasonable to assume Bethesda wants Roundhouse to work on something Prey-shaped. Bethesda acquired the Prey IP in 2009, and in 2011 it announced a sequel coming from Human Head. However, Prey 2 was eventually scrapped and the project was picked up by Arkane, which turned it into the reboot we know today. Last year, prototype footage of the cancelled sequel surfaced, and while it's only a vertical slice, this footage suggests Prey 2 was fairly far along when it got the axe. If Bethesda is planning to get more mileage out of the Prey IP - and that is a big if, to be fair - hiring the creators of the original game under a new development arm would be a tidy way to do it.

As we said in our Prey 2017 review, the reboot was worth the wait.