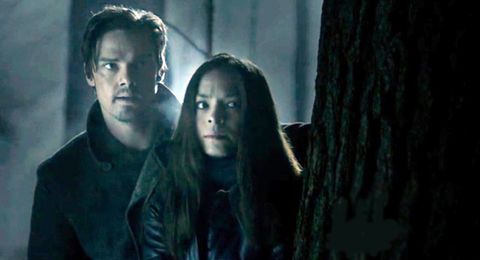 THE ONE WHERE Vincent takes Alex away for dirty weekend but Muirfield knows where they are. It’s up to JT and Catherine to save the day. Also we talk about feelings.

VERDICT After a few episodes which really had us hoping that this show was improving, “Cold Turkey” comes along to scupper that theory.

This episode exemplifies everything wrong with this show: bad acting, bizarre coincidences, bat’s-arse logic and repetitive conversations between characters.

There were so many things wrong with this episode it’s difficult to know where to start.

Difficult. But not impossible…

First off, the relationship: this is Beauty And The Beast . It’s supposed to be the two of them against the world, but instead we’re treated to soap opera angst again. We know Vincent is dangerous to be around; we know he’s in hiding; we know he’s being hunted. We know Catherine is a cop; we know she’s risking a lot even spending time with Vincent. But for God’s sake we wish they’d stop having the same heart to heart they’ve been having since dot. These characters are supposed to be the heart of the show and they come across as whiny pathetic kids; never being honest with themselves or each other. You’re bloody adults – figure it out!

The relationship has been the biggest problem with this show since the start. It seems the writers don’t know how to handle the two main characters and have decided to just repeatedly throw things in their path. This sort of thing happens in all TV show romances; it’s a regular trope, but here the main obstacle is always the characters changing their minds every ten minutes because they’ve jumped to this conclusion or not been honest about that. It’s getting to be pathetic.

Vincent’s behaviour here with Alex is stupid and selfish. Okay, he sees a chance to get a normal life. But all the characters have talked about is how dangerous everything is. They talk about it all the bloody time. All. The. Time! And he just drops all that caution to head off for a dirty weekend and neither JT nor Catherine bang his head against a wall? Can nobody see this is a spectacularly bad idea?

The there’s Police Partner. After constantly bugging Catherine about her love life and her relationship status, finally there’s something Catherine wants to talk about and PP says, “No, let’s do police work.” What? The character has only ever had one trait and this week she ditches it?

The case Catherine grabs out of the pile concerns a drug ring at the hospital where Alex just happens to work. Narcotics apparently have a bunch of warrants. Isn’t Catherine a homicide detective? Why is she handling a narcotics case? Oh, yeah, because it involves Vincent’s ex.

When the police raid Alex’s apartment, they find a recently bought bag of lingerie and Police Partner leaps to the conclusion that Alex bought sexy underwear because she must have a boyfriend, maybe the boyfriend’s in on the drug scam and she says let’s find the boyfriend. This makes little sense and is an obvious attempt to just let Catherine do her “worried about Vincent” face.

After being told to wait in the cabin, Alex follows Catherine and Vincent – never mind that they have cars and she doesn’t – and she manages to find them and sees Vincent’s Beastly action which scares the hell out of her. After such an interesting set-up for Alex, to have her just panic and run away is a really poor turn of events. From seemingly strong character to wimp – a big let-down.

And at the end of all the drama Vincent comes to Catherine and says he always really loved her anyway. After starting the episode heading for a romantic weekend away with another woman and talking to her about running away together, he’s back giving it big puppy eyes at Catherine and she buys it? Wow.

There’s so much more we could highlight but we’ll spare you. Suffice to say after a couple of episodes where things were looking a bit better Beauty And The Beast has taken a giant step backwards.

The best part of the episode is the JT/Creepy ME Guy subplot. Having JT willing to blackmail ME to get him to shelve his research is a great move for the JT character. Having ME be sceptical about the idea of a conspiracy and then find a bug in his lab is also a good move, and gives ME a bit more info about what’s going on. This little bit of good stuff wasn’t nearly enough to save the episode.

BLACKMAIL It turns out Creepy ME Guy has a skeleton in his closet: Lila Burrows, a 22 year-old female died on his operating table in England. ME was cleared of any wrong-doing but he still feels guilty. His guilt caused him to run away to America and take up his current job. Ooh, he’s got layers...

THE CABIN IN THE WOODS People keep saying “Cabin in the woods” all through this episode. Every time you hear the phrase you can’t help but think of a certain film. That’s it; Joss Whedon now owns the phrase “The Cabin in the Woods” and nobody will ever take it away from him.

MURDER DEATH KILL No real crime this week. There is a house search but it’s a lame tag on to the main plot. Catherine and Vincent kill three blokes from Muirfield in the woods.

LAMEST EVIL ORGANISATION EVER Muirfield has got to be the crappiest shady organisation ever. Last time we saw them they sent two carloads of men against Vincent and co and got their arses kicked. This time they send just three men. They’ve been bugging Alex’s apartment for God’s sake. They know exactly where Alex and Vincent are going. And it’s a remote location. Why not surround the whole cabin and fill it with knock-out gas or something? No, they lure Vincent out in a very obvious way and, with nowhere near the man power needed, they get handed their arses again. As for the bugging of people; come on, we’ve seen Enemy Of The State – you can hide bugs better than just sticking them up on a high shelf. Please Muirfield; you must try harder!

Catherine: "I was trying to take the high road!"
JT: "How about taking the Long Island Expressway, exit 91?"