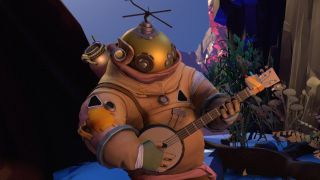 The appeal of many space games is their vastness, encouraging players to go anywhere and do anything within the simulated void: fight space pirates, become a trade mogul, or just point your ship in a random direction and keep going for hours. Outer Wilds is comparatively very small. It takes place within a single star system with no more than a dozen planetoids, and you only have 20 minutes to explore it all before the sun goes supernova and destroys everything. So why was it one of our picks for the best games of PAX East 2018? It's a video game where the apocalypse isn't something to prevent, but a beautiful and necessary part of the world.

What else is new?

See all the biggest games on the horizon with our list of the new games of 2018.

In Outer Wilds, you play as a lone astronaut from a plucky backwoods space exploration agency. You pilot your ship to strange planets using a six-degrees-of-freedom control scheme (an autopilot is available, though landing is still up to you) before exploring them on foot. For flying-about-in-space fans, the process feels more involved than No Man's Sky but stops well clear of more simulationist stuff like Elite: Dangerous. Rocketing out of the atmosphere for the first time and surveying all the possibilities before you is breathtaking, but you don't have very long to explore them. Remember that "supernova will destroy everything" bit I mentioned earlier? Yeah, that.

Luckily, one thing does survive the explosion: your memories. A mysterious alien sculpture intervenes before you first embark, blessing/cursing you with a perspective that will always rewind from the moment of your death to just before initial takeoff. The first time I died in Outer Wilds, I didn't even make it off the starter planet - I was just testing to see if the game had fall damage! Answer: yes, it definitely has fall damage. The second time, I made it to a hollow planetoid studded with alien ruins, and I found a nice little lookout point facing the sun before a piece of the planet broke off and crushed me to death. The third time I fell through a black hole, though I actually lived through that part! Unfortunately, the other side of the hole was only far enough away from the dying star to buy me a few extra seconds of appreciating its brilliant death spasms.

Each time a reel of images from across my journey played in reverse, ending with me right back at the campfire where I began. The deaths didn't feel frustrating because I learned something each time (both in-game and on a meta level), and I already knew exactly what I wanted to try on my next go-around.

The end of the end

"The idea is that your character remembers every loop, but there's no physical persistence," creative lead Alex Beachum confirmed after I finally looped my last (for now). "There's also a ship computer that will store things you've discovered over time. The idea is that there are only knowledge gains in the game; you can't upgrade your ship or yourself or anything. Technically you could beat the whole game in one loop if you knew what to do."

So yes, you can beat the game - or "finish it," as Beachum quickly corrected himself. There is an ending of some kind. But don't expect a Groundhog Day scenario where you finally figure out what to do and set everything right. The explicit storytelling parts of the game - talking to your fellow space explorers, translating ancient alien records - are mostly just about figuring out what's happening.

The loop itself is a brilliant way for a relatively small team (13 people in-office at Mobius Digital) to create an entire star system where something is always happening, even if you're not around to see it. Wave your signal detector around and you'll hear radio-crackling music from your fellow explorers who have settled down for one last performance, playing the world out, and you'll see astronomical events like a volcano planet erupting, tornadoes spinning across a tempestuous surface, or an entire planet slowly crumbling.

"We wanted to make a world where everything's changing over time," Beachum said. "Because you can't get away with a planet falling apart unless we're like, 'Put it in a time loop! It works!' It's that sense of being in a chaotic system that you're not in control of, right? It's like you're exploring and all this is happening and you have to deal with it. And of course as you go, you learn ways to, y'know, not die instantly. But [it's about] that feeling of not being in control. Nature's gonna do its stuff, and you can learn about it, you can learn ways to navigate within it, but you're not gonna ever be able to stop it."

Did you ever intentionally run out the clock in The Legend of Zelda: Majora's Mask? Just standing around in the deserted streets of Clock Town, watching the manic moon growing ever closer, and waiting for the end of everything? It's a beautiful way to lose. I had a similar contemplative feeling the first time I stopped to watch the supernova begin in The Outer Wilds, with a key difference: when I watched the moon come crashing down in Majora's Mask, I felt guilty. I was supposed to be the hero and save the day, but I let the end come anyway to satisfy my morbid fascination. Outer Wilds lets you savor those final moments like a normal person might: for instance, roasting marshmallows on a campfire (a carryover from one of Outer Wilds' original prototypes).

"The game is a very 'fall game,' you know, like an autumn sort of game," designer and producer Loan Verneau told me. "It's at the end of the universe. And because we like to make the game about exploring in a sense, because you're at the end of the universe, you're exploring for the sake of exploring. It's not like the end goal is saving the world and doing all that - it's more about thematically just figuring out for the sake of understanding."

Outer Wilds will arrive on PC sometime this year. Console versions are not officially confirmed but very likely - it struck me as the kind of game that could make the transition quite smoothly (I played the whole thing on an Xbox One controller). From the handful of loops I played, I hope this game spreads out as wide as possible. There's nothing else like oblivion hanging on the horizon and having all the chances you need to enjoy it.