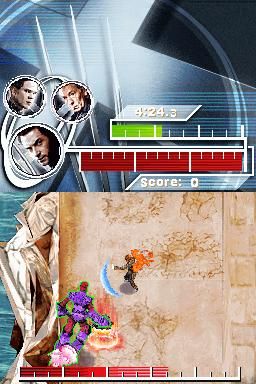 You know, for a while there, superhero games were experiencing a renaissance. Most of Marvel's heavy hitters, Hulk, Spider-Man and even the X-Men, have seen solid games that make excellent use of the license – but X-Men: The Official Game plays like a drunken blend of three separate games that can't get their act straight.

Set in between the second and third films, you play through completely linear levels as either Wolverine, Nightcrawler or Iceman. Each handles extremely different from the other and tries to offer a unique perspective of gameplay, though all they really do is piss you off. You can power-up each mutant after they complete a mission, tagging points on strength, healing or other such things, but these unlucky X-Men never learn anything new.

Let's start with Wolverine. Cool character, total badass. But here, all you'll do is mash on the attack buttons for hours. Every mission is "defeat the guards" and then "defeat the teleporters that the guards spawn from" and, finally, "defeat the guards." The Silver Samurai, Lady Deathstrike and Sabertooth all show up, but beating them is just a matter of, you guessed it, punching and kicking. A lot. No cool abilities, like climbing walls with your claws - no, just punch. And maybe kick.

Iceman gets off a little easier. He's always flying around on his ice sled, blasting various targets out of the sky. You're either blowing them up in a sectioned-off arena setting (like with the giant fire-snake level we've seen so much of) or hovering straight through a tunnel Starfox-style. Not terribly boring, but nothing changes from the first mission to the last. Sled around, shoot some stuff and on to the next mission that plays exactly the same.

Then there's Nightcrawler, who could potentially hold a game on his own. The bit here is constant teleporting - you can zip all over the terrain, from flagpoles to dangling wires, even right behind unaware enemies. If the stealth portion mattered at all, and every stage didn't boil down to more punching, Nightcrawler's levels could have been something. Instead, they just make you hate Wolverine's straightforward bashing stages even more.