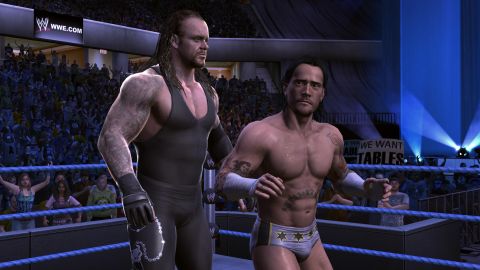 When making a wrestler, there are two main things to consider: how they look and how they fight. When building your wrestler’s body, there are so many customizing options that it’s easy to be paralyzed by choice. Just how much should the eyebrows arch? On which side does this wrestler wear an elbow pad? Does that scar placement look right? Still, if you really put in the time to learn the ins and outs, it can be rewarding (though it might turn off more casual players).

While improvements have been made to the overall quality of how guys and gals from create-a-wrestler modes look, in a match it's still not that hard to tell the differences between, say, your created Rob Van Dam and the game's John Cena. But it's getting closer. The newly added paint tool helps for creating logos, but for those who can't draw a straight line – like us – it can be daunting at first, and we never really got a hang of it, though we've seen proof of what the really skilled can do (more on that later).

Making a custom move set can also be intimidatingly deep, especially for new players. Hell, even we have trouble keeping the difference between a Shining Wizard and a Diamond Dust straight, let alone the many different types of elbow drops. And when you have a specific wrestler in mind that you just perfectly recreated the look for, it can be a huge downer to start their first match and see that the simply titled "Elbow Drop 5" is completely wrong for them. It takes a bit of trial and error before you’ll really be able to understand the vast collection of moves here.

On the plus side, Create-A-Finisher returns this year, with even more options than before. Sure, we still have trouble creating just the right Evenflow DDT, but SvR2010 brings it closer to our grasp. You can also now create top rope finishers, which can be as real or as silly as you like. Want to do four somersaults in the air before landing on the guy? Go right ahead and give it to whatever insane wrestler you just made. Again, not perfect, but significantly improved.

The grandest addition by far is the Story Designer mode. Avid creators have long desired something to actually do with all the wrestlers they made. Sure, you could plan a Pay-Per-View or a tournament before, but the stories were only in your head. Now you can take any wrestler in the game, or any created character, and put them in a story of your design. You could have it unfold over one week of Raw and Smackdown, or you could expand it to up to TEN YEARS of thrice-weekly shows. The possibilities are almost limitless.

Setting up the matches is the relatively easy part. Just pick the competitors, the setting, style and smaller things, like how injured each wrestler will be at the start of the match. It’s what goes on between the matches that has the real depth. When creating scenes that lead to and follow matches, you pick the setting, characters, actions and reactions, preset events and dialogue. It wouldn’t have hurt to throw in a few more places to be or events in which to participate, but the sheer volume of potential combinations make it deeper than it seems at first.

If anything, the depth and possibilities of the stories you can create, multiplied by the possibilities of created characters to include, leaves an almost frightening level of customizability that will be daunting to even old hands. Sure, plugging in a USB keyboard to type away dialogue makes it easier, but just making a five-minute scene you’re satisfied with can sometimes take an hour or more, even for the experienced. And when playing through a story, particularly complicated scenes can take seemingly forever to load. The truly devoted out there will make some really great stuff, but for much of the audience, it may be too intense to be worth the time.