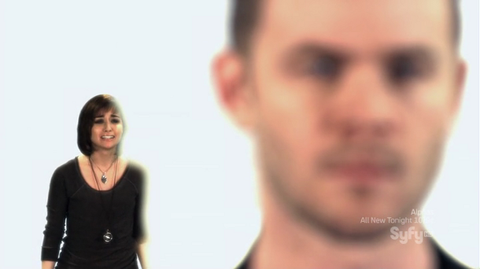 THE ONE WHERE Cthulhu creatures are running wild and there’s more reset-button hi-Jinks.

VERDICT Ah, that’s more like it. After last week’s season four premiere misfire, “An Evil Within” is a partial return to form for Warehouse 13 , with an abundance of goofy humour and a satisfying mix of case-of-the-week and season arc.

What’s unusual is that the case of the week takes too long to get going, and doesn’t really have enough of a tale to tell, while the season arc seems to be telling its story on fast forward. Jinks’ resurrection, in particular, feels massively rushed, which dissipates any dramatic tension a little too soon. It means another irritating stab at the reset button as well, but after last episode’s epically misjudged rewind Jinks’ return barely registers on the “what the hell are they playing at?” scale. Perhaps we have reset fatigue.

Pete and Myka’s playful working relationship has always been Warehouse 13’s greatest joy, and the mischievous moments return proper this week: Pete’s impression of a bobble head and Myka’s cnidarian phobia our highlights. Great artifact too: HP Lovecraft’s key possessing the ideal blend of believable fact and outlandish fiction, as all the best artifacts do, but we doubt the slightly shonky squid men running about in this episode are quite the Eldritch abominations that terrorised Lovecraft’s waking dreams.

Solid, but still some way off Warehouse 13 at its best.

DID YOU NOTICE? A brief Wilhelm scream as the second victim is pushed out of the window of the dentist’s office.

OUT COLD According to Claudia, Steve was clinically dead for 4,320 minutes, or exactly three days.

SCHOOL PRIDE In the first scene featuring Pete he can be seen wearing a Wright State Raiders t-shirt. Actor Eddie McClintock is a Wright State alumni.

KEY ARTEFACTS HP Lovecraft’s Silver Key (aka, The Key To The Gate Of Dreams – makes anyone who touches it appear like a monster to others) and Johann Maelzel’s Metronome (can bring people back from the dead).

BEST LINE
Myka: “ This isn’t real. What you’re seeing isn’t going to hurt you. I mean, he’s annoying and childish and sometimes I wish I could throw a chair at him; but he’s not dangerous.”

Click here for all our Warehouse 13 news and reviews.

Jordan Farley
Jordan is the Community Editor at SFX and Total Film. When he isn't watching movies or sci-fi shows of questionable quality he's probably shooting men in space or counting down the days till the next Zelda comes out.
See comments
Gaming deals, prizes and latest news