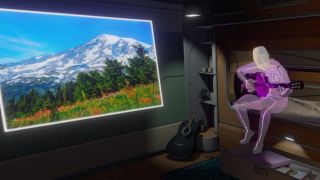 The great paranoid prediction that robots will take our jobs has come true. Well, at least in video game form. I had a chat with Fullbright’s Steve Gaynor (of Gone Home fame) who’s working on Tacoma, a narrative-based game which positively embraces the fact that AIs have rendered professions like computer programmer and technician obsolete. But Tacoma’s artificial intelligence isn’t an evil, human-hating being. A lot of thought has gone into how AIs could be a realistic part of our future, and Fullbright has gone a lot further than just making their AI affable. Whether it’s the history behind the development of these computer-tethered personalities, or their relationship with humans, we’re getting the first glimpse of a truly viable depiction of AI.

A stricken sense of absence pervades the space-station you’ve been sent to investigate. You play Amy Ferrier, an AI Communications Specialist who’s been instructed find out why the entire crew has disappeared. Even stranger is the fact that for some reason ODIN, the station’s AI - who would usually be the first resort in assisting the authorities - is offline. Yet when you arrive, he pops up, gently pulsing, in the form of a blue pyramid. ODIN’s voice is calm and balanced, until a sudden jolt stretches him into a slash of electric blue. His voice warbles before he disappears completely. Although your first glimpse of him implies he’s suffered some kind of damage, ordinarily ODIN is like an acrobat effortlessly keeping multiple plates spinning.

Semi-transparent digital overlays hovering on each wall act as his eyes and ears, through which he can interact with multiple crew members at the same time whilst he’s running the ship. But it takes time to reach this level of competency. The missing crew members (seen via the augmented reality recordings scattered around the station) describe AIs as being like "mighty redwoods" which tower over the landscape, stoic products of the technological industry who have been around for decades. One of the crew mentions that they’re effectively "ancient organisms, growing and adapting year after year". They learn, and adapt their software based on their experiences, so switching an old AI for a new one would be like taking two steps backward. What you’re getting rid of isn’t a dry computer programme, but a specially tailored co-worker. Considering the high expectations we have for the human race, it’s entirely plausible that AIs might become self-sustaining organisms later on down the line.

Unlike the likes of Siri, Tacoma’s AI won’t act the same as when they were first created. Gaynor reveals that each one "has mentally developed separately from other AIs, so based on their own personal experiences they’ve become their own person". So when you’re walking around the station (or floating in zero-gravity), any augmented reality recordings you find show an ODIN who has developed on his own terms, not programmed to be affable or calm, but having learnt that this approach suits him well. Even though there’s a six person crew on the station, the Fullbright team wants to make it clear that "there’s actually seven characters in any given scene", as ODIN is as much of an individual as any human. He might run the ship behind the scenes, but that doesn’t mean his wisdom and expertise can be dismissed as being down to a few lines of code.

Yet even if their personalities and history are as realistic as they can be, you can’t escape the fact that AIs are still visually "kind of opaque, inscrutable". So suspicion on the player’s behalf is inevitable as "there’s this level of trying to determine what their weaknesses are or what their motivations really are". Gaynor is eager to point out that this doesn’t mean you should suspect ODIN of being your typical menacing AI, however. Rather than his omnipresent state being a barrier to any form of trust, Gaynor hopes that his innate mystery will make players want to find out as much about him as possible. Fullbright isn’t hiding from the fact that AIs are different. Instead the studio wants to tickle the player’s curiosity in the hope that they’ll "delve more deeply into trying to relate to that entity as a character on its own terms". Presumably AIs have their own issues to navigate and protocols to abide by, which might contradict some commands they’re given by the crew. Battles between various loyalties - some hard-wired into ODIN’s system, others earned over the years - would be a fascinating issue to explore.

A big part of keeping AIs realistic is acknowledging that our world would change significantly once they became a part of the daily routine. Although their whole purpose is based on their ability to out-do humans, like any co-worker they need instructions. That’s where protagonist Amy Ferrier comes in with her official title of 'AI Communications Specialist'. Although ODIN is a character in his own right, he acts very differently to humans. So you can’t chat to him normally. Amy has been trained to see AIs as pieces of sentient technology who act very differently to humans. Working directly with AIs requires someone who knows what sentence structure to use to get them to carry out demands, what kind of language will send them off on a tangent and which will pinpoint exactly what they have to do.

Gaynor explains that any interactions with AI are based partly on "a technical position of understanding" where Amy knows "the systems that define its behaviours", so she comprehends the ins-and-outs of the rigid code which determines how ODIN acts and influences the decisions he makes. Curiously, Gaynor also mentioned that she also has to use "a psychological, sociological skillset" to analyse AIs’ patterns of behaviour. Humans have had to alter how they envisioned interacting with technology. Similar rigour as used when writing code has to be attached to the speech used to talk to AIs, as one misstep and everything could go wrong.

Usually I’d be sceptical of AIs in any capacity. Omnipresent, omniscient beings, staring over me and everything I do, and unquestionably smarter than me? No thank you. But in Tacoma, I think I might just be able to get along with ODIN. It’s about time for a truly realistic depiction of what has until now been an easy villain trope. Perhaps Tacoma will even provide some inspiration for AI designers and those who are keeping their eyes on the job market of the future.

Tacoma by Fullbright will be released in 2017 on Xbox One and PC.