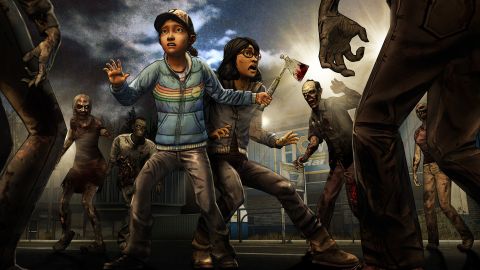 Clementine’s been through a lot for someone who hasn’t even seen her 12th birthday yet. She’s watched countless people die at the hands of undead walkers, roving bandits, and other harsh elements. A fellow traveler has just been bitten, and Clementine knows what needs to be done--and she’s capable of doing it, even if no one else is. She wasn’t always this way, though, and season two of The Walking Dead lets you follow in her footsteps from innocent child to hardened survivor. And save for a few missteps, it’s a fantastically harrowing journey.

Season two of The Walking Dead picks up right where season one left off. Within the opening moments of episode one, Clementine finds herself lost, alone, and frightened in a world she’s desperately trying to understand. She meets old friends, makes new ones, deals with a crazed despot, and, ultimately, makes some hard choices in a perpetual series of lose-lose scenarios. It lacks the interesting father-daughter dynamic between her and season one protagonist Lee Everett, and the encounters and close shaves with death, while memorable in their own way, lack the surprise of dealing with these things the first time around. Still, season two goes to some real dark places, with Clementine forming its heart and soul--and you determine how she develops.

Being able to shape how Clementine grows, develops, and how people react to her is the highlight here, and it’s where Telltale’s choose-your-own-adventure really shines. Throughout her travels, you're prompted with numerous choices--some are small, quiet moments that let you get to know your fellow survivors, while others put the lives of your friends in the balance. Playing as a kid is way different than an adult, as they shove you off to the side as they bicker and argue amongst themselves over petty disagreements. My Clementine constantly surprised grown-ups over twice her age, taking a direct, no nonsense approach to many situations, while still trying to be humane to those who deserve it. I may have even let her try alcohol once or twice (hey, she’s seen some shit, alright?). She can be strong, meek, hesitant, or reserved, all based on how you pipe up (or don’t) in each set of dialogue choices. Regardless of how you develop Clementine, it’s joy to watch her mature right in front of your eyes--even if it is in an apocalyptic wasteland.

Previously on The Walking Dead...

While playing season one isn't essential, your enjoyment of season two will be greatly enhanced if you have--especially if you import your save file. It won’t change any major plot points, but hearing Clementine and her old friends refer back to previous choices you made is really neat, and it helps tie all of your experiences together. Definitely play 400 Days as well, as many of season two's ancillary characters are introduced here.

Unfortunately, that’s really the extent of the effect you have on The Walking Dead’s narrative. Like in season one, picking sides causes people to react to you in different ways, but the plot still moves forward just the same. Decide to steal someone’s medicine or let them go; you’ll be in the same spot regardless of what you end up doing. Occasionally your choices will affect who lives or dies, but everything always ends up reverting to some kind of status quo. Moment to moment, The Walking Dead is thrilling, and it feels like your choices matter--examine it too closely and you realize that you’re merely given the illusion of choice. It’s no worse than the first season, but it ends up feeling more obvious the second time around.

Still, while the choices you make might not necessarily affect the overall story, they certainly affect how you feel about its numerous characters. I was worried that season two wouldn’t be able to deliver characters as compelling as the ones we got in season one, and that’s certainly the first impression I got when Clementine stumbles upon this new group. But over time, you get to know them and really connect with them as people. Luke attaches himself to Clementine as a surrogate big-brother, and the badass lone-wolf Jane teaches her how to survive at all costs. Even Carver, the megalomaniacal head of a budding utopia (and voiced by a scene-stealing Michael Madsen) feels relatable--his my-way-or-your-face-smashed-on-the-highway approach to leadership is extreme, but in the end, he’s only doing what he thinks he needs to do to survive in this harsh world. As in season one, season two’s cast follows a wide range of personalities, and each one is flawed in their own unique ways. They’re all capable of great acts of kindness as well as sweeping acts of betrayal--just like, you know, real humans are.

Unlike season one, season two completely sheds its extraneous adventure game roots. It doesn’t bog itself down pointless puzzles or fetch quests (people who remember finding batteries for a certain radio know exactly what I’m talking about). Rather, season two is constantly about forward momentum, as it propels you from one bleak scenario to the next. For the most part, this works in its favor--and whether you’re running from zombies or enjoying a brief respite, every moment feels deliberate. It really is a roller coaster ride of emotions (mostly depression), and Telltale has nailed the art of the cliffhanger in this series.

That said, season two’s pacing feels off. Major plot points are wrapped up by episode three, leaving the back half of the game to languish in this weird survival purgatory. There’s no real endgame--merely survival--and the last two episodes drift along aimlessly until the season's ultimate conclusion. The payoff is certainly worth it, as its exploration of the evils any of its characters are capable of finally comes to a head--I just wish it didn’t take so long to get there. Even with these pacing issues, season two is still worth playing, as there are some truly surprising moments that will make even the most hardened player reel in shock.

Season two also keeps its signature quick-time events intact, and if you hated them in season one, you’re going to hate them here, too. When you’re not navigating The Walking Dead’s myriad life-ruining decisions, you’re mashing buttons or matching on-screen directional prompts to avoid bandits or shambling zombies. Like the plot, these QTEs certainly feel like you’re doing something, and they definitely spice up the action, but they occur far too frequently, and your input is way too basic to be anything more than contrivance at best, and the red arrows have a tendency to blend in with all the action on screen, leading to more than a few frustrating restarts.

Even with its hiccups, season two of The Walking Dead is absolutely worth playing, with an interesting cast of characters and a narrative that is still sufficiently gripping despite its less interesting parts. It’s not quite game of the year material, and it doesn’t feel as necessary as season one, but Telltale proves that Clementine’s story is one well worth continuing.