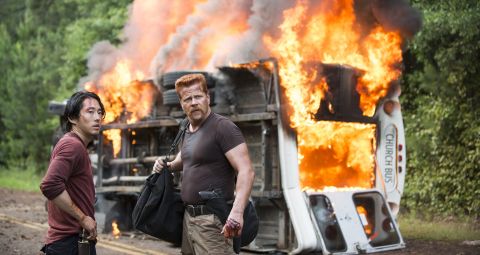 Abraham and Eugene were two of the most interesting additions to The Walking Dead's cast last season, but they've been largely on the sidelines ever since. No longer. With the survivors split into factions again, and Abe leading the journey to DC, this episode shines a spotlight on the apocalypse's oddest couple.

The result was an episode which felt charmingly old school, like we'd been warped back to the pre-prison days. There was a briefly exciting walker attack, an intermittent (and somewhat vague) flashback focusing on Abe's troubled past, and a lot of Very Meaningful Conversations about feelings and zombies, but mostly feelings.

Happily, "Self Help" is actually going somewhere with all this. The flashback, which is initially as appealing as those found in a Kate episode of Lost, is later revealed to be a neat way of bookending Abe and Eugene's friendship. The final scene shows us the beginning of it, juxtaposed with its apparent end.

So, Eugene's secret is out. He's a fraud. A liar and a faker. People have died following his fantasy of an easy end to the world's zombie problem. As with Gareth's death a few episodes back, the speed with which we've reached this reveal is both surprising and pleasing. Other shows would have strung the deception along for longer and ended in potential disappointment. Not The Walking Dead.

Eugene's barnet comes in for a well-deserved kicking this week. “Why the hair?” Glenn asks. “Because I like it,” Eugene snipes back, and that's just the start. It's a bit harsh – I mean, it's a rubbish 'do, but it's hardly the worst example of its kind. And it's not as if King Flattop can comment...

The decision to play the revelation out through Abraham's reactions was also smart. As the show has progressed, he's shown a real vulnerability. He puts a lot of value in friendship and trust (he's just so pleased when Glenn sides with him early in the episode) and is understandably devastated when the truth comes out. Michael Cudlitz finally gets to show a bit more range than “surly” and “smart-arse”.

Eugene, meanwhile, also develops hugely as a character. He's authentically creepy, whether spying on his friends having sex or sabotaging their vehicle to slow their progress. And yet he's also, if not exactly sympathetic, then at least pitiable. He has recognised that he's not cut out for this world and (like the cannibals and Gabriel) resorted to playing dirty to survive. Josh McDermitt clearly enjoys his chewy dialogue and some deliberately clunky jokes this week.

There's some pacing issues and the episode sags in the middle. The Walking Dead's commitment to being the quietest show on TV, with long scenes of nothing but ambient noise and dialogue, is laudable and sets it apart from pretty much every other current genre show. The downside is that, occasionally, it feels like a trudge. "Self Help" has a strong final act, but a rather meandering middle.

It's also a little disappointing that we don't get even a hint of what's going on with Beth/Carol/Daryl. Looks like they're going to eke that one out for as long as they can...

Lest it was seeming like "Self Help" is a bit of a sausage fest, Tara also gets some decent scenes. She holds her grounds in arguments and is very sympathetic to Eugene, despite him screwing everyone over. Whether that will be the case from now on is another matter... Poor Maggie, though. She has about one line this week!

Walker Of The week

That bloody terrifying old man who gets caught in the broken window. Some serious shivers there, and more outstanding makeup from Greg Nicotero's team.

In the comic, Eugene appears to be in contact with some survivors in Washington. Rick travels with him, but the two get into a fight and Rick discovers that it's all an elaborate ruse. Both Rick and Abraham are pretty darn ticked off. In the TV version, at least, Eugene reveals the truth voluntarily, making him slightly more heroic than his black-and-white counterpart.

Abraham: “We've got an air filter filled with damn human remains. There is no DAMNED corner of this DAMNED earth that has not been dicked hard beyond all DAMNED recognition.”

The Walking Dead airs on AMC in the US on Sundays and Fox in the UK on Mondays.