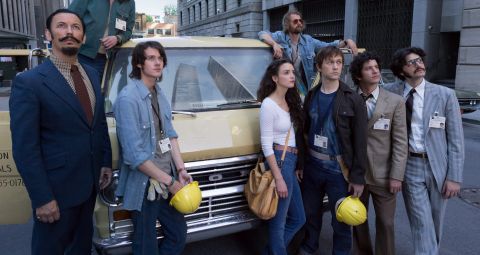 A patchy biopic that only thrills when Gordon-Levitt finally steps out onto the wire. Still, for all the 3D showboating, it’s a touching tribute to the Twin Towers.

“Why do you walk on the wire? Pourquoi?” asks high-wire walker Philippe Petit (Joseph Gordon-Levitt), direct to camera in the opening moments of The Walk. It’s a question audiences may want to ask director Robert Zemeckis, whose colourful but unsteady drama tells the tale of Petit’s 1974 tightrope walk between the World Trade Center’s towers.

Thanks to Oscar-winning 2008 documentary Man On Wire, that story’s still fresh in the memory, and though Zemeckis started work on The Walk before James Marsh’s doc hit, releasing his film in its wake comes with a nagging sense of déjà vu.

Still, Zemeckis certainly strives to put his stamp on Petit’s story, bringing to bear his flair for FX (Roger Rabbit, Polar Express et al). Utilising 3D IMAX to its vertiginous limit, he puts you right up there with Petit during The Walk’s superior second hour, trembling alongside the man himself on a 450lb steel cable.

Petit’s backstory is similarly shot with an eye on spectacle. We meet him working as a Paris street performer, where he falls for busker Annie Allix (Charlotte Le Bon, channelling Winona Ryder) and goes on to be mentored by Ben Kingsley’s Czech circus trainer. When he comes across a picture of the Twin Towers, Petit decides fate is steering him toward his destiny.

There’s eye candy aplenty in The Walk’s black-and-white opening, with its beautiful, Spielbergian flourishes of colour, and the 3D is immersive instead of obtrusive, drawing us into Petit’s world. If the visuals score high, though, the rest of Zemeckis’ film struggles to get off the ground.

With shorn hair and CGI’d blue peepers, Gordon-Levitt confidently captures Petit’s buzzing eccentricities, even if his French accent occasionally slips into ’Allo ’Allo! cliché. But he can’t save a clunky device that sees him narrate the story from the Statue Of Liberty, which only bleeds the film’s central set-piece of tension.

For all its obvious ambition, Zemeckis’ film suffers most for being too broad in scope. Its backstory-heavy first hour (drawn from Petit’s autobiography To Reach The Clouds) is overly twee, and the pace only picks up when, halfway through, The Walk transforms into an engaging heist movie as Petit and his co-conspirators infiltrate the Twin Towers.

“To walk on the wire,” he says, “this is life.” It’s just a shame Zemeckis shows so much of Petit’s life, when all that really matters is what happens on the wire.

A patchy biopic that only thrills when Gordon-Levitt finally steps out onto the wire. Still, for all the 3D showboating, it’s a touching tribute to the Twin Towers.