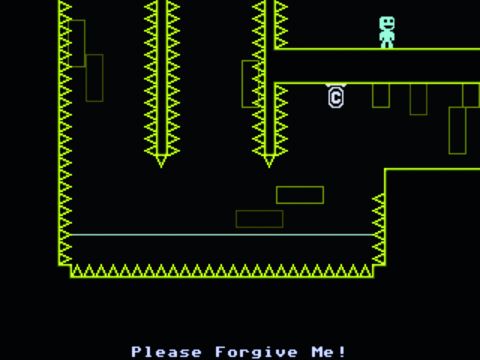 As the captain of an interdimensional craft, you crash your ship, lose your crew, and then get lost yourself. To put it right again, you must explore the collapsing VVVVVV dimension, where you move by upending gravity.

VVVVVV is a 2D platformer where you can’t jump. Instead you flip gravity on its head and fall upwards (by pressing ‘V’ – or space, or Z), then flip it back. The joy comes from plotting your path across ceilings and floors, around spikes, perhaps over moving platforms, to the next screen. VVVVVV is both reminiscent of long-gone Spectrum platformers, and completely its own game.

Checkpoints are everywhere, and an absolute necessity. The whole game is one long difficulty spike. We died 2,000 times in five hours. It requires absolute mastery of your three movement buttons – one pixel out and you’re dead, slipping off the edge of a platform and up into spikes. And then alive immediately afterwards, thanks to the checkpoints. It’s devilish. Inches from success after hours of failure. Even the small mercy of the frequent checkpoints is turned against you in one brilliant puzzle, where you need to be very careful about where you resurrect. One corridor is called ‘the warning’, and is full of them, mocking you.

It can be frustrating, but only because you’re not doing it right – this isn’t the silly end-boss brand of injustice, nor is it an obtuse lateral puzzle. It’sjust a game that requires patience and absolute perfection. A typical puzzle will ask you to weave quickly and accurately through spike-choked shafts, flipping between multiple screens, to land on a vanishing platform for just long enough to flip gravity again, and re-thread the same path. All to cross a knee-high barrier you otherwise can’t jump over.

Which sounds maddening, and anyone watching will think you’re using some sort of self-torture device, but there’s a delicate joy hidden in VVVVVV. When you have to navigate four screens without dying, you can only start to practise the second when you’ve learned to zip flawlessly through the first. It’s like safe cracking – you run, you flip, you wait, you flip, you die, you try again. This time you get to the second platform, and when it raises you into the spiked roof, you notice that you can flip and land on the underside instead.

There are enemies of a sort: the word ‘LIES’ coming out of a megaphone, or spinning coins rotating in a corridor shaped like a dollar symbol. Touch those, touch pretty much anything, and you die. The point isn’t re-doing huge sections of the game when you fail. It’s about failing so often that it becomes a Zen experience. You either complete the level, or you find where developer Terry Cavanagh lives and deliver a horse’s head.

The fierce and relentlessly upbeat soundtrack is dripping with personality, a real labour of love. You could say the same about any aspect – the snippets of dialogue between excited or terrified crew members, the puzzle design, the strobing splendour of the world, and even the names of the rooms. It all makes VVVVVV truly special. It’s a beautifully made game with lots of challenge, atmosphere and polish.