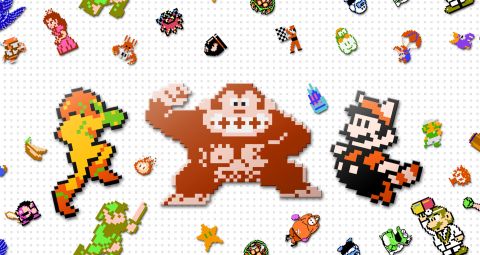 In the time it takes to read this opening paragraph the average Ultimate NES Remix player will have shattered a boxer's jaw, bounded off dirt ramps and sent a lumbering ape falling to his death. Had you attempted these feats in their original NES form - Punch-Out!!, Excitebike and Donkey Kong , respectively - in the same time, you'd still be puffing dust out of the cartridge by now. That 3DS owners boast such efficiency is due to Remix's clever hook: it takes the games of your childhood and serves them up as quick blasts of minigame fun. It's basically WarioWare: NES Edition, and every bit as catchy as that sounds.

The result is a trip down memory lane inside a bumper car. You ricochet between 16 NES classics, every collision giving a glimpse of what makes each game special. In the Donkey Kong stages, for example, simple barrel bounding leads to advanced item strategies before a final stage asks you to topple your simian foe. Written down it sounds like a retro autopsy, as the nerds of today gather to pick at DK's 8-bit corpse. It's testament to Nintendo's mechanical might that these smaller parts/organs actually come alive when studied in detail. A 30 second barrel hopping exercise forces you to appreciate a graceful jumping arc that might get lost in the blur of the full game.

The concept lives and dies on the games you plug into it. With Ultimate NES Remix being a blend of Wii U's Remix 1 and 2, it gets to cherry pick the very best. Shallower fare like Urban Champion and Pinball are rightfully given the chop, allowing for a roster with no weak link (apart from a few Zelda minigames where you guide a literally frail Link through deadly gauntlets). Focusing on the main mascots arguably limits the game's genre reach - 11 of the 16 games are platformers - but even this offers some cool perspective as you watch Mario's 2D evolution from Donkey Kong to Super Mario Bros 3. And hey, I don't see anyone weeping for the lack of 1983 clunker, Baseball.

Returning after its popular introduction in NES Remix 2, Championship Mode riffs on the 1990 Nintendo World Championships tour. Back then, contestants gathered in cities across the country to compete in a bespoke Super Mario Bros. / Rad Racer / Tetris challenge. The modern mix uses Super Mario Bros., Super Mario Bros 3 and Dr. Mario and uses online leaderboards to save you the hassle of driving 200 miles only to be thrashed by a ten year old with fingers faster than The Flash. Not that I'm bitter or anything. Honest.

And this isn't to say bigger heroes aren't capable of surprises. Offering games in minigame cross-section can give you appreciation for instalments you may have written off. I never managed to get very far with Zelda II: The Adventure Of Link, so the chance to play the very best bits - duelling with Iron Knuckle, say, or pogoing a sword off a horseman's head - actually had me reaching for the full game again. Nintendo clearly foresaw these changes of heart, embedding sneaky links to the Virtual Console pages of 3DS eShop should the urge to buy overcome you. Another standout is Kirby's Adventure, its 13 minigames showing off a range of ideas that make even Mario look conservative.

Once you've mastered the individual games, you can enjoy the titular Remixes. These bespoke games take the 16 included titles and mash them together or flip them on their head. You're asked to fight Zelda II's Octoroks as Super Mario Bros. 2's Toad, complete Super Mario Bros. stages in silhouette or weave around Balloon Fight's spikes as the camera woozily zooms in and out. The best ask you to complete simple tasks with the wrong moveset: Samus' arm canon may eat through alien scum, but it's terrible at carving through bricks in Mario's coin chambers. Some are so good you wish they were the whole game. Reinventing Super Mario Bros as an autorunner is genius.

The problem that plagues the NES Remix series is that these special stages can overshadow the regular games. As compelling as it is chasing high star ratings for faster times (with special rainbow stars for the fastest fingers), it hardly compares to the surprise of taking down Donkey Kong as Link. Why not make a game purely of remixes? The problem is amplified if you come to Ultimate having played the Wii U games: there are no new challenges to discover, making this very familiar territory. The only true addition is Speed Mario Bros., a sped up version of Miyamoto's classic that challenges your muscle memory, if not the little voice in your head wondering if it's worth shelling out for.

None of this matters if you're new to the series, but it is a shame that 3DS doesn't get an instalment of its very own. The Remix format is better suited to portable gaming, with the bitty challenges and three star rating system bringing to mind iOS superstars Angry Birds and Cut The Rope. With its much improved online leaderboards, packing handy replays that display the button presses your enemy used to humiliate you, the game has never been more conducive to competitive play. Having found a more natural home, let's hope it's here to stay. At least until it gets a proper sequel of its very own.

This game was reviewed on 3DS