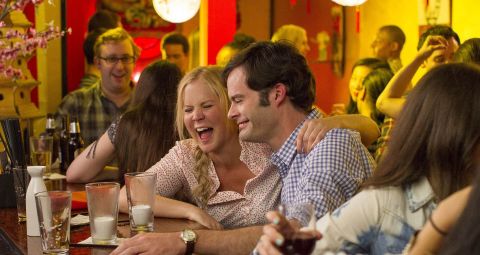 Amy Schumer is a force to be reckoned with – but despite some belly laughs Trainwreck doesn’t quite transcend the romcom formula like the best of the genre.

If you hadn’t heard of Amy Schumer pre-2015, it wouldn’t have been a pop culture faux-pas. Now, she’s grown in popularity to the point where barely a week goes by without one of her sketch-show clips going viral. And as soon as she was tapped up to write and headline Judd Apatow’s latest, superstardom was pretty much a given.

It’s hardly surprising that the comedy kingpin gravitated towards Schumer: like him, she blends crude, gross-out gags with acute observations and moments of vulnerability. And where Apatow often casts his own wife and kids in his films, Schumer similarly puts her life on screen, her sketch-show persona a heightened version of herself, also named Amy.

In Trainwreck she again plays ‘Amy’, a magazine journalist enjoying a monogamy- free lifestyle in New York. A prologue sets up Amy’s philandering father’s excuses as the cornerstones of her attitudes, but who cares? She’s enjoying her life, career and sexual freedom. When she’s assigned to profile ‘sports doctor’ Aaron Connors (Bill Hader), a relationship blossoms and she starts to question her commitment phobia.

The film is at its funniest during the first half when Schumer unapologetically cuts loose. There’s filthy dialogue and racy humour aplenty, not least between Amy and her semi-regular fling Steven (WWE’s John Cena).

A foulmouthed force of nature and likeable with it, Schumer also has decent dramatic chops. Threatening to steal the show from under her is basketball player LeBron James, happily skewering his image by playing himself as a Downton Abbey superfan, and an unrecognisable Tilda Swinton is sensational as Amy’s ghastly editor.

Like Schumer’s sketch show, Trainwreck is peppered with great moments, but some jokes work better on paper. The second half is less satisfying, as Amy and Aaron’s budding relationship hits the rocks according to standard-issue romcom formula, and the tone becomes uncomfortably judgemental of Amy’s previous ways.

And as with all Apatow films, it’s simply too long given it’s on such a predictable path: losing 20 minutes might have alleviated the dips for a steadier stream of laughs.

The pace picks up for the final act, with a painfully hilarious sequence involving Ezra Miller’s intern, and a glorious, grin-inducing feelgood climax that’ll leave you beaming. Once that feeling wears off though, you’re left with the disappointment of such a bold, interesting character going down such a conventional route.

Amy Schumer is a force to be reckoned with – but despite some belly laughs Trainwreck doesn’t quite transcend the romcom formula like the best of the genre.