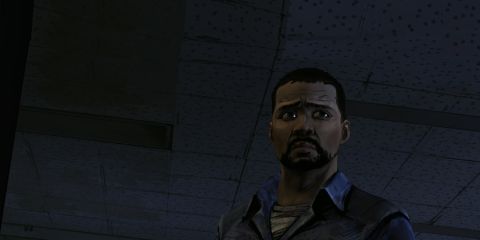 By and large, most choice-driven games have followed the same formula, inviting you to make your mark in the world by deciding if you want to be “good” or “bad,” and accepting the binary nature of existence. But in the post-apocalyptic world of The Walking Dead, where the titular dead walk the decaying earth, the notion of good and bad is somewhat dated. There’s no “right” when right can mean shooting an innocent child before it can turn into a flesh-eating beast, and there’s no “wrong” when wrong can mean stealing the supplies you need to survive from those just as needy as you. The Walking Dead is the story of the choices you can’t live with, and the choices you can, coming together to create an experience as depressing and pessimistic as it is remarkable and memorable.

The Walking Dead never pretends to be anything less than a cruel, dour analysis of humanity’s downfall. You’re tossed into the cuffs of Lee Everett, a convicted murderer on his way to prison when the first episode begins. In the opening moments, his police escort is sidetracked by the zombie apocalypse, freeing Lee into a world that’s not nearly as comfortable as a jail cell would've been. Soon, he’s joined by the young Clementine, a child left on her own after her parents took a poorly timed vacation and her babysitter contracted a bad case of the flesh munchies. And off into the new, horrible world Lee goes, hoping to find Clementine’s parents despite knowing that they’re likely dead; off to find sanctuary when he doubts one even exists.

In stark contrast to the rest of gaming, The Walking Dead is more focused on what you do than how you do it. There aren’t many traditional puzzles, per se, as much as there are tasks that you’re asked to perform to move the story forward. Menial activities like finding batteries for a radio or starting up a train aren’t all that engaging by themselves, but they serve a very necessary pacing purpose, as well as give you a chance to explore the world a bit and get to know the characters better. If you’re looking to rampage around Georgia popping the heads off of undead monsters, you’re better served by one of the many other zombie games on the market.

Though some might be turned off by this minimization of traditional gameplay, it works well in the context of the game. The effect you have on the world is fairly minimal by design, mixing together Telltale’s point-and-click adventure game style with a smattering of quick-time events and choice-driven dialogue. This amorphous take on gameplay works very well to make you feel like you’re a part of the world, without allowing you to go too far off the rails. But just because you’re not allowed to stray too far off the beaten path, doesn’t mean you don’t have an actual influence--on the contrary, your words and actions actually play an integral part in crafting the world.

Incredibly strong writing and voice-acting give the narrative the spotlight it deserves. The vast majority of the characters you interact with are well-developed, and it’s hard not to feel compassion for even the meanest of the bunch, making you actually care about who you foster relationships with and who you choose to disappoint. What’s more, your actions have an impact not just on the events that you encounter, but in how people treat you. Don’t back up Kenny when his son is accused of being bitten, and he might not have your back a few episodes later when you need him to. Side with Lilly when she’s trying to ration the food, and she might respect you enough to help you in the coming episodes.

Your choices, both large and small, have repercussions, and can change the course of the remaining episodes--even if it’s only a slight shift. Split-second choices made later in the game can rewrite how people react to you regardless of how you’ve treated them up to that point, making each and every action all the more important. Inaction, too, is usually an option, amplified by the inclusion of a timer that makes it possible to completely miss a chance at making a decision, forcing you to sit on the sidelines and watch whatever your indifference hath wrought.

These decisions wouldn't be as emotional if it didn’t feel like there was something on the line, but there is: Clementine. The hopelessness of the world would be infectious if not for her constant optimism, giving you something to fight for. She’s slow to adapt to the fact that good and evil are now meaningless, and her innocence keeps the concept of hope alive in the survivors. More importantly, it makes it harder to justify going against what you think is truly “right,” since you know you’re going to have her big, sad eyes staring up at you. It’s heartbreaking and motivational, inspirational and depressing.

The Walking Dead’s success isn’t in creating a Choose Your Own Adventure game with hundreds of possible outcomes and limitless plotlines. Instead, it reflect the reality of life, reminding you that many of the choices you’re given have predetermined outcomes, and some things simply can’t be changed. And yet, this undermining of everything that makes The Walking Dead unique is arguably its greatest triumph. Despite not always being in control, The Walking Dead makes you feel as though you are. Even though you can’t always save someone from death, you can give it your best try, shaping the person you are. And it’s up to you to decide if it’s worth the effort to change what, in all likelihood, can not be changed.

Sure, you can replay it to see what else would happen, but that won’t change anything. It won’t change that you’re not going to leave The Walking Dead happy. You’ll feel like you made mistakes. You’ll feel like you could have done better, if you gave it another go. At best, you’ll leave without any regrets, knowing that you did the best you could do. The Walking Dead deals in a spectrum of emotion that few other games dare to take on, and it does so with aplomb. It’s utterly triumphant, crafting a narrative that proves the power of the medium by embracing what makes it unique, leading to one of the most memorable gameplay experiences ever created.