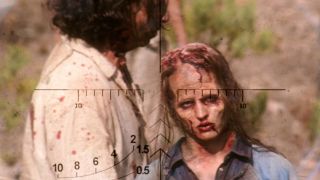 ‘Tis the season for organised death theme parks to open their gates. While Jurassic World obviously closed relatively quickly last year after all that dino-induced murder, Jurassic Park author Michael Crichton’s other ‘Disney-with-a-deadly -twist’, Westworld, is getting an HBO makeover this year. The Rezort, from director Steve Barker, staggers into the mix nicely.

Set in a world where humanity has just survived a zombie apocalypse and come out the other side not covered in teeth marks, The Rezort takes place on an island which just happens to be the last place on earth where there are undead. What can you do there? Shoot them, of course. There’s money to be made in stupidity after all.

As high concepts go, it’s a winner. Tourists flock from all over the world to hunt down the staggering undead. Melanie (Jessica De Gouw) is there with her boyfriend Lewis (Martin McCann) to try and rid herself of her zombie induced PTSD, while others, like Dougray Scott’s Archer, are a little more mysterious on the matter. Even before things go a pear shaped - because of course they were going to - The Rezort manages to pull off a pleasingly satirical zombie experience.

Businessmen queue to fill undead flesh with UZI bullets but the infected are held in place with shackles, swung out on boards like a shooting gallery. Yes, this is how humans can pay to feel powerful. It might be big and stupid but Barker’s zombie movie has more smarts than most as humanity looks more the fools than the creatures with their faces hanging off.

The motley crew that end up attempting to survive The Rezort once things go downhill are entertaining enough. While two teenagers who won their trip after an esports competition are initially irritating, some sweet performances rein in the frustrations and Dougray Scott is, well, Dougray Scott. There’s of course some predictable characters - Claire Goose’s park manager is enjoyably clinical - but the right people meet a sticky end and the last half hour is a rollicking zombiefest with a surprising Romero style twist that genuinely strikes an emotional chord.

There’s no shortage of undead nightmares out there but The Rezort stands a rotten head and shoulders above the rest and while it’s mostly on concept alone, there’s plenty of genuinely tense moments. It’s far superior to Barker’s previous Outpost movies and ideal popcorn fodder with, y’know, actual brains. Hunt it down. And remember to aim for the head.