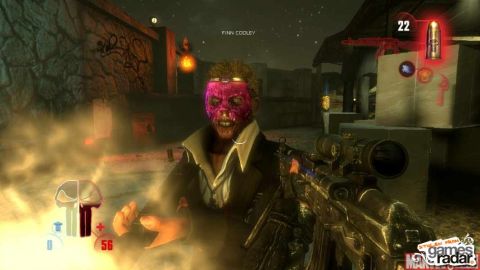 Spider-Man and Hulk work well as open-world adventurers and the X-Men make for stellar action RPG stars. Few Marvel Comics properties fit the first-person shooter bill like The Punisher, and Frank Castle’s wanton violence in the name of vigilante justice is a comfortable premise for a videogame. Unlike the last generation’s solid third-person Punisher game, however, The Punisher: No Mercy is a sloppy, online-focused FPS that’s disappointingly dull in almost every regard.

For starters, the campaign in The Punisher: No Mercy is mindlessly easy (more so if you complete it through online co-op). The 30 minute-long story mode is a hollow set of arena battles that are bookended by incomprehensible comic book cutscenes. The idea of a clone army of arch nemeses is a decent excuse to send Frank Castle into a multiplayer arena, but the narrative is poorly written nonsense that’s full of wooden voice acting. Even the hilarious amount of profanity couldn’t stop us from muting the repetition of looping lines like “I live to do what has to be done” - pulled right from the comic, but made meaningless here - and “What, you think you’re f---ing Captain America?”

Where the single player succeeds is in its rewards: completing campaign levels unlocks new guns, new abilities and character enhancements, which carry over to the online multiplayer. Character skills like speed boosts play a more active role than a meaner-looking rifle, though. Even boosting your power through item pickups doesn’t add weight to the combat. The shooting feels imprecise regardless of which gun you’re firing, and without character reactions or on-screen indicators, it's tough to tell if you’re even hitting your target. The absence of visceral impact ruins an already unimpressive online multiplayer game. The derivative game modes don’t offer any original ideas, and the bland, cookie-cutter arenas are tiny, especially if the room is full at eight players.

The Punisher: No Mercy is an aggressively mediocre FPS. Any decent ideas suffer from bad design decisions, and so the shallow multiplayer is a hollow experience that even the most hardcore Frank Castle follower will want to skip. Yes, at press time it's only $10, but it could be free and we'd still think it sucked.