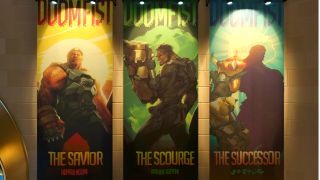 The momentum might be building for Terry Crews to play Doomfist as the new Overwatch hero but game director Jeff Kaplan has shut that right down with eight words.

"24" obviously refers to hero number 24 and on the Overwatch forum where Kaplan posted this, fans who can't quite believe Doomfist isn't happening next are freaking out.

In a question about emotes, Kaplan explains that "we have multiple new heroes being worked on" as posters descend in it a frenzy of speculation and, to some extent, denial.

"Great question. The emotes themselves don't take months. It's more on the order of days/weeks. It's more of a prioritization issue. We have multiple new heroes being worked on right now plus numerous events and event-related content. We're always asking ourselves 'what would make the biggest impact for the most people' when we prioritize. Right now, we feel like introducing a new hero to the line up would be more impactful to the game. Hope that makes sense."

There's more than a few a few Jack Bauer jokes, as well as one poster pointing out that the Greek alphabet has 24 letters. That's linked to the idea that Greek actor Alex Malao would be playing the next hero after he listed Overwatch on his CV.

However, he's since responded to YouTuber TheKingFenrir to deny that, saying he was playing a character speaking Greek (presumably for the Ilios map).

The main take away here though is "no Doomfist", not year at least. If Terry Crews goes near a voice recording studio likely know about it before he reaches the mic, given fans fervour for him to play the part.