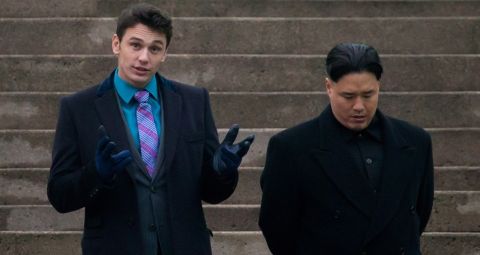 Ten years from now, no one’s going to remember anything about this fluffy stew of bro-comedy idiocy apart from all the cybermayhem caused by protesting hackers. Was it worth their trouble? Of course not. The Interview is the spawn of the same crew who brought us Pineapple Express and shares a similar frat-house, no-girls-allowed, dick-joke sensibility. But Express had a stoner charm and Danny McBride to keep it afloat. The Interview has neither.

James Franco plays a clueless shock-talk TV host named Dave Skylark; Seth Rogen is his put-upon showrunner Aaron. Through a series of sitcom-y circumstances, they get the opportunity to interview North Korean dictator Kim Jung-un (Randall Park), who happens to be a big fan of Skylark’s.

The CIA, represented by Lizzy Caplan, recruits the two oafs into assassinating him, but Skylark ends up bonding with the lonely despot, indulging in all of Jung-un’s favourite pastimes: basketball, drugs, gang-bangs, blowing shit up with tanks... Will the two hapless Americans be able to pull it together to kill Kim and escape North Korea alive? You probably know already.

There is some merit to making a film as audacious as this, one that pushes the kind of buttons politicians can’t or won’t. And amid all the idiocy, there is some light shed on just how thorny and difficult it is to negotiate with foreign powers, especially ones as diametrically opposed as the US and North Korea. But in mistaking smarm for charm, The Interview just looks like an unfunny satire of pro-American propaganda.