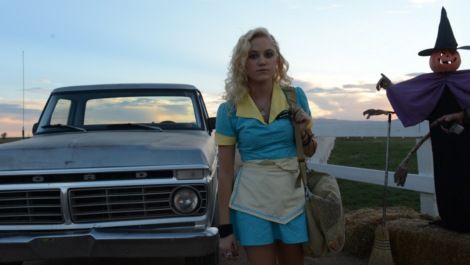 Rare is the thriller that converts Downton Abbey fans to the dark side. But this could do the trick. Starring Dan Stevens – aka Abbey ’s Matthew Crawley – it’s another playful ’80s-infused crowdpleaser from Adam Wingard and Simon Barrett ( V/H/S , You’re Next) , who more than know their way around the video shop. We begin with army boots pounding the desert floor, before a lurid title card arrives with a speaker-shuddering chord. It’s Dead Man’s Shoes to Dario Argento in one cut, although A History Of Violence via Roadhouse gives a better idea of the mood.

The boots belong to David (Stevens), who arrives at the Peterson family’s door with a message from their late son who died on duty in Afghanistan. Mourning mum (Sheila Kelly) invites this nice young man to stay, doubting dad (Leland Orser) is not so sure; daughter (Maika Monroe) dismissive, son (Brendan Meyer) smitten. Soon, David’s inveigled himself into family life, instantly becoming the coolest thing in Dipshitville. Could he be too good to be true?

Well, yes, but there’s an indecent amount to enjoy here: sensitive central performances, cameos from Wingard buddies Joel David Moore, Ethan Embry and A.J. Bowen, whetstone-sharp dialogue, some big laughs and a synth score that pumps like blood in the ears. Especially cherishable are the scenes where dreamy David suddenly shows his mettle, snapping bones and smashing faces to protect his new family, despite their protestations. The tension between them needing him and fearing him makes up the best part of the film.

Like David, the third act badly outstays its welcome, but even this cruises merrily by, thanks to his cringey charms. The stuff that Diet Coke breaks are made of, the film all but swoons every time he flexes a muscle – let alone steps out of the shower. Even if it doesn’t launch Stevens’ career Stateside, it’ll keep his existing fans more than Abbey .