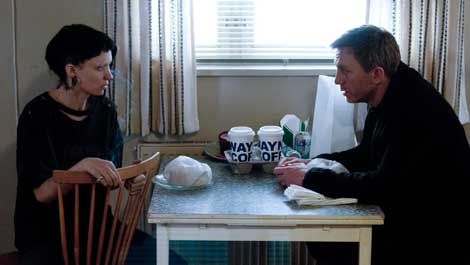 Why release a Hollywood version of Stieg Larsson’s 30m-selling novel just two years on from the choice Swedish adap of The Girl With The Dragon Tattoo starring Noomi Rapace as the instantly iconic title character Lisbeth Salander?

Apart, that is, from the obvious: 30m people have read the novel, a lot of them can’t be arsed to also read the film. As ABBA sagely sung, “Money, money, money…”

Because it’s directed by David Fincher. Meaning it’s a Hollywood retake in geography only (and even then, Fincher’s opted to keep the story in Sweden rather than transpose it), and meaning we’re guaranteed the kind of uncompromising, adult-themed entertainment Hollywood excelled at in the late ‘60s and ‘70s.

So welcome to the feelbad film of the year, a blockbusting thriller about sex, sexual violence and institutionalised abuse, based on a book originally entitled Men Who Hate Women , centred on an angry, subjugated, socially maladroit heroine, and shot entirely in wintry greys, hypothermic blues and jaundiced yellows. With a cold, onerous score by Trent Reznor.

The killer, for she is presumed murdered, is likely a Vanger: “Thieves, misers, bullies… my family,” spits Henrik.

Eighty minutes in, Blomkvist is joined in his investigation by Lisbeth (Rooney Mara), a hacked-off hacker who hides her vulnerability beneath a carapace of piercings, tats, black leather, serrated fringes and open hostility. Together, this oddest of couples unearth a ghastly secret…

It is to Mara’s immense credit that she emerges from Rapace’s ink-black shadow to imprint her own design on Lisbeth, her wan, open face capturing each contradictory emotion roiling inside. This role, this performance, will change her life – she is literally unrecognisable from The Social Network ’s preppy East Coast scholar Erica Albright.

Craig does the job, diligently, bringing gravitas and touches of humour, though lacks the everyman quality of Michael Nyqvist’s Blomkvist.

And Fincher’s direction is immaculate. His Girl might lack the propulsion of Se7en or the slow-burn desiccation-of-souls quality of Zodiac , but it is a controlled, mesmerising, beautiful thriller scarred by scenes of unshakeable brutality and breathless tension.