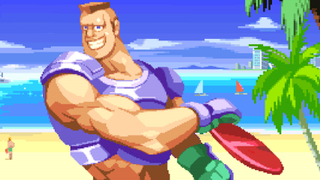 This, dear reader, is a tale of two 'jammers. Our story begins in 1994, when Data East released Windjammers on the Neo Geo arcade system to little fanfare. Imagine Pong, but instead of boring white paddles, you control totally radical athletes from around the world who fling a pixelated frisbee back and forth at inhuman speeds, attempting to slam the disc into the point-scoring barricade behind their opponent. In the many years since its debut, Windjammers has gone from a largely unknown versus game to a cult classic of arcade sports, a one-on-one sport that lets players bask in tubular '90s vibes, tight gameplay, and superpowered special shots that are guaranteed crowd pleasers.

Flash-forward to present day, as we enter the renaissance of virtual disc-hurling tournaments. Announced at PlayStation Experience 2016, Windjammers is making an official comeback on PS4, complete with online play - but it's not the only frisbee game in town. A new challenger / friendly rival has appeared in the form of Disc Jam, a 3D-rendered homage to the Windjammers formula that delivers the same degree of exhilarating competition, with the same immeasurable potential for intense volleys and shouting-at-the-screen excitement. Our own Dave Roberts and Lucas Sullivan played and adored both Windjammers and Disc Jam at PSX, and they've each chosen to champion their go-to 'jamming game below - but with both of these fantastical sports set to be released in 2017, we're all winners.

If you've never heard of Windjammers before, you're not alone. For a while, it seemed like it was simply lost to time, as developer Data East's closure caused the bulk of its licenses to transfer to a Japanese developer called Paon, forcing the Japanese Virtual Console version to be delisted from the Wii eShop's digital storefront before ever making it to the West. As such, it's one of those games that you've either lucked out and played in the arcades back in the day and fondly remember, or you're wondering why everyone keeps talking about it with such excitement.

French developer DotEmu - a studio responsible for bringing numerous classic games like The Last Express and Final Fantasy 7 to modern PCs and mobile devices - acquired the rights and is porting the extreme beachside flying power disc game to PlayStation 4 and Vita. It'd be one thing if this was simply nostalgia talking, but after a quick round (and a few rematches) at PSX, Windjammers feels just as good as it did 22 years ago.

Its controls are incredibly easy to understand, and with a top-down view of the action, the only thing you need to worry about is making sure you line up with the disc to catch it and deciding whether to throw it straight or lob it back as fast as you can. Underneath the two-button simplicity and evocative pixel graphics, though, lies a mountain of strategy. Bankshots can fake out opponents, each court ranges in size, scoring layout, and obstacles, and different characters have various power moves you can activate to blast through the competition. Matches are quick, the action is quicker, and the upcoming console release is even adding online play, finally allowing 'jammers the world over the chance to compete against one another.

Windjammers is basically perfection, a convergence of simplicity, elegance, skill, and style, and I'm so excited that more people will finally get a chance to experience the thrill of whipping a flaming frisbee for themselves. 2017's game of the year is basically sorted - everyone else is just playing catch-up. - David Roberts

The two friendly fellows who make up High Horse Entertainment absolutely love Windjammers - so in a time when Data East's game seemed lost to the legal aether, they started putting together their own take on head-to-head frisbee warfare for PS4 and PC. And though Windjammers will be making a comeback, the Disc Jam developers aren't mad about it: this homage happens to be a fantastic competitive game in its own right, and the two can easily co-exist in the disc-flinging scene. The fundamentals are the same here - players catch and fling a frisbee in an attempt to make a throw past their opponent - but the new perspective and nuanced mechanics pump added depth into Disc Jam's online and offline matches and, in turn, create more room for mastery.

First off, there's the most obvious difference: 3D visuals, with a behind-the-back camera angle similar to what you'd see in a typical tennis game. Disc Jam's color palette feels a bit muted next to Windjammer's tropical blues and hot pinks, but it's definitely a good-looking game, with spiffy particle effects to denote your special throws and fluid animations for the two jammers currently on offer. Whether you go with a muscular dude or an athletic lady, you can customize their looks with a suite of costumes and sleek skins, which should make your favorite character in the finished roster feel that much more unique. Same goes for the high-tech disc, which, yes, you can reskin to look like a giant plastic frisbee.

Then there are the little touches that give Disc Jam its own identity as a goofy future sport. Nothing caps off a particularly intense volley like a hilarious ragdoll of the loser being blasted away from their own goal, a la Rocket League. Different modes determine the method of scoring: some work the same way as Windjammers, where the goals are segmented into sections worth different point totals, while others will increase the up-for-grabs score with each successful throw, until both sides are terrified of screwing up the potential payoff. Disc Jam isn't restricted to just one-on-one, either - you can also square off in 2v2 doubles play, which leads to as much smack talk and camaraderie as you'd imagine.

When you want to get really technical, there's much to discover about the finer points of Disc Jam. As in Windjammers, you can create a shield to pop up an incoming toss and hopefully trigger a special attack. But you can also curve any throw to the left or right using the shoulder buttons, which can throw your opponent wildly off guard if used correctly. You'll also want to avoid the humiliation of trying to catch the disc while facing away from it, because you'll only end up stumbling from the impact instead. With all the little tricks and approaches to learn, Disc Jam distinguishes itself as the deeper game - but quite honestly, you're going to need your fix of both Windjammers and Disc Jam at any and every competitive gaming gathering in 2017. - Lucas Sullivan