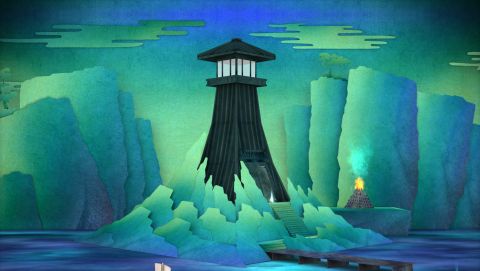 If you play any game long enough, you’ll end up taking the visuals for granted. At some point you just stop noticing the immaculate play of shadows on the barrel of your assault rifle or the way shafts of sunlight pierce the trees. You’re too busy scanning for hostiles or hunting for power-ups.

Tengami, the debut game from Nyamyam studios, never reaches that point--partly because of the two-hour runtime, but mostly due to the sheer splendor of it all.

Tengami’s aesthetic delights are fueled by the meeting of two very strange bedfellows: Japanese wood-block printing and European pop-up books. Either of these art forms would have made for a very pretty game, but Nyamyam forged one of the most arresting experiences you’re likely to play by melding them together. The clean lines and flat planes of the papercraft world only serve to accent the vivid colors and distinctive environment design you’ll see as you guide a melancholy paper samurai on his quest to replace the bloom on his favorite cherry tree. The commitment to papercraft extends even to your samurai, who disappears when you try to look at him edge-on.

As lovely as the simple, colorful aesthetic is, you won’t be truly captivated until things start moving. Every environment and building in Tengami is a carefully constructed pop-up, folding and unfolding at your bidding. Watch a lighthouse or pagoda fold away at the swipe of your finger. Swipe your finger over a pop-up and it will fold or unfold, while the samurai moves to any location you double tap. Objects the player can interact with are highlighted by a set of golden rings, so you don’t ever have to try and hunt for the bit of paper you can unfold, which is a nice difference from your common adventure game. What’s amazing is that unfolding bridges and towers never really gets old--you’ll find yourself flipping more than once just so you can see Nyamyam’s creations in motion.

Tengami is an adventure game at heart, using puzzles and environmental challenges to slow down the player instead of hordes of bad guys. Most puzzles are easily solved, though a few roadblocks provide a bit of challenge.The final major puzzle in particular is excruciatingly hard, thanks to a lack of clear instruction--I hope you’re familiar with Chinese numerals, or you’ll be in trouble. It’s a lone sore spot--puzzles are largely intuitive during the rest of the game.

If you can’t get by without frenetic action, you probably want to look elsewhere--Tengami is not a fast game.The plodding walk of the samurai and slight backtracking you’re asked to do really drags things out. Twitch-junkies will be grinding their teeth, but most gamers won't find it too painful.

Tengami isn’t perfect. It’s short. The slow, meditative atmosphere isn’t for everybody. Sometimes the commitment to aesthetic splendor means you’re going to have to work extra hard to solve what should be simple puzzles. But if you can get past that, you’ll find a beautiful, intuitive experience unlike anything you’ve played before.