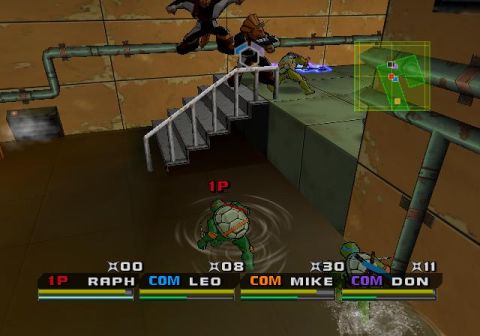 At least there's some truth in advertising with the beat-'em-up Teenage Mutant Ninja Turtles 3: Mutant Nightmare. This game is someone's nightmare, to be sure.

The fantastic foursome of Donatello, Raphael, Leonardo, and Michelangelo must brawl and brawl some more to save the day. Enemies are plentiful, and each of the amphibian heroes exhibits some variation in his move set, so the fundamentals are certainly there. The game also provides the opportunity to augment a turtle's health, strength, etc., by collecting various ninja scrolls. New moves can also be purchased, which seems out of place considering the heroes are trained ninjas, but the mechanic at least serves as minimal incentive to move through the game.

Nightmare suffers badly when it veers off-course. At one point, the turtles are aligned at the bottom of the game screen and forced to hurl throwing stars at enemies. It's a ridiculous segment wholly disregarding the fact that the turtles are nimble, acrobatic creatures. With the turtles fixed in place, players must alternately chuck their weapons and block, chuck and block until ennui ensues. It's also no surprise that even though this segment works so poorly and manages to evoke no thrills, it's repeated at various intervals throughout the game.