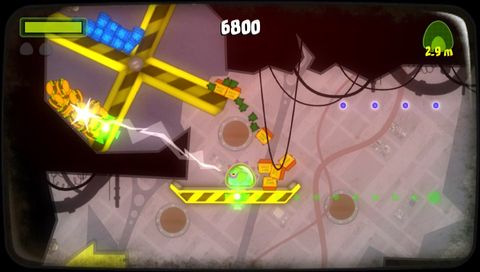 It’d be easy to breeze right past Tales from Space: Mutant Blobs Attack!!! in the PlayStation Store. It’s an indie game with a modest-sounding name, and if you didn’t know anything about it, you’d likely pass it up for more well-known titles. And that would be a crying shame. Vita gamers expect a level of quality from the likes of Uncharted: Golden Abyss and Lumines: Electronic Symphony, but this one comes completely out of nowhere, and mark our words, it’s the tiny $8 game that’ll steal your heart.

Produced by Drinkbox Studios, a Toronto-based indie studio, MBA is a physics-based platformer that weds familiar mechanics to uniquely fun retro motifs. The setup is told in a 30 second exposition: you’re a blob that’s been cultivated in a lab. You and your fellow lifeforms seize an opportunity to break free and return to space. Upon breaking out, you begin to eat and absorb more and more objects on your way to liberation. Of course, it’s easier said than done.

As you pick up different items and grow in size and diameter, you’ll be able to eat barriers that prevent you from advancing. You’ll also have to overcome horizontally tracking death lasers, fatal spike pits, and other hazards. And as you progress, you’ll be treated to a variety of unique stages that utilize different features of the Vita, including the accelerometer to tilt and roll. Sometimes those bonus stages are a bit fidgety, but generally, you’ll enjoy the novelty.

Overall, Drinkbox’s approach works effectively because it toys with styles of play that you’ve likely spent years honing—especially platforming and jetpack navigation—and finds new ways to challenge you. For example, you gain the power of magnetism early in the game, which allows you to stick to a metal object with the L button or repel away from it with the R button. Drinkbox then throws you into an area full of metal pipes and deadly spikes. You’ll have to carefully time your attracts and repels to weave through peril. It provides a thrilling sense of accomplishment as you clear the area.

In other instances, you’ll have to use the Vita’s touchscreen controls to move platforms around. Sometimes they shield lasers, and in other instances, they launch the blob over spikes. It’s the layout and context that makes the mechanic work effectively.

MBA’s gameplay feels progressively challenging, but fair. It seldom feels that the game is working against you, but you’ll definitely find yourself retrying areas more than once. We also love the pacing of the game. We played through it during a few commute days, and the time it takes to clear stages dovetails nicely with the sort of experience that we want from handheld games. You may not completely clear a section after a 15 minute train ride, but you’ll get awfully close, and there are enough sections and sub-levels to keep you playing for a while.

MBA’s quirky and subversive artstyle complements the sound gameplay quite well. It combines the look of a web cartoon with lots of inside jokes regarding video games and popular culture, largely in the background. The cute look of the blob softens the fact that it’s eating everything—including innocent bystanders—that get in its way. The presentation definitely helps damper any frustration that you may feel as you retry different sections.

Tales from Space: Mutant Blobs Attack!!! is a great showcase for what digital games can do on the Vita. It’s well-executed, it’s got an appealing look and a sharp sense of humor, and the pacing works well for handheld play. When you’re browsing through the PlayStation Store on your Vita checking around for something new to play, make sure you don’t pass this one up. It’s well-worth your time, and more than worth your money.