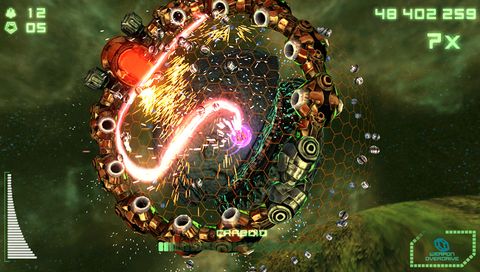 Super Stardust has become wildly popular in a very short period, first as a staple of many PS3 owners’ collections as Super Startdust HD was the first game to support trophies, then as a not-as-stellar PSP title. It’s inevitable that the franchise would come to the PlayStation Vita, and Super Stardust Delta makes a beautiful leap to Sony’s new system.

For the uninitiated, Super Stardust is a shoot-em-up in which you move a spaceship along the spherical surfaces of several planets and blast through waves of missiles, asteroids, and whatever other debris and threating items come your way. You fight through wave after wave until you encounter a massive level boss, then conquer each planet. It’s a twin-stick game—on the PS3, you steer with the left and fire with the right; the PSP game suffered from using the face buttons to shoot—that forces you to think fast and depend on your shields and a dash function to evade danger. It’s a proven formula that works exceptionally well.

Delta adds several new wrinkles to Housemarque’s popular mechanics. Many of them center around the Vita’s hardware capabilities, but unlike so many launch games, they blend in naturally and give the game a sense of uniqueness that’s missing from several other titles. Aside from full twin-stick support, Delta allows you to tap on the touchscreen and rear touchpad to unleash massive missile attacks and devastating black holes, respectively.

Delta also takes wonderful advantage of the Vita’s accelerometer to allow you to not only emit a massive pulsewave that clears out legions of enemies, but lets you tilt the screen to get different angles on the enemies you battle. It’s invaluable in boss fights, as it lets you get a better angle on each level boss and strategize your attack effectively. Also, if you’re inclined to play in a more traditional style, the game also offers a “Pure” mode, that gets rid of certain enhancements and touchscreen functions.

One of the reasons that the game functions so well as a proper handheld shooter is the nature of the gameplay. It’s highly conducive to being picked up for 15 to 20 minute bursts on a bus or subway, and it’s easy to lose track of time, as we discovered when we missed a subway stop while trying to crack a level boss. Upon beating each planet, you’ll also unlock some brief, but fun minigames. Delta takes advantage of the Vita’s social features. If you’ve got the Wi-Fi + 3G system, you’ll be able to see how you fare against your friends in a matter of seconds thanks to the game’s leaderboards.

Overall, Super Stardust Delta offers a great deal of engaging and entertaining gameplay in a tiny package. Although you may be deliberating over several other PlayStation Vita launch titles, there’s no reason not to add this game to your collection. Even if it weren’t lower-priced in comparison to other games in the lineup, there’s enough here to make it far more intriguing of a game to add to your collection. Don’t hesitate to pick this one up.