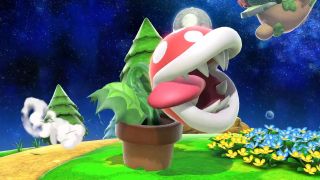 Super Smash Bros. Ultimate's full-to-bursting roster will get even bigger with at least six DLC characters after the game comes out, and one of them will be free for early adopters. The news comes from a lengthy Super Smash Bros. Ultimate Nintendo Direct presentation that gave us an in-depth look at the game's many modes and features, and as usual, the best best bit was the new fighters.

Series steward Masahiro Sakurai first introduced two new martial artists to the base lineup: Ken from Street Fighter and Incineroar from Pokemon Sun and Moon. Ken is an Echo Fighter of Ryu, meaning he plays similarly with a faster movement speed and a different Hadoken blast. Incineroar is its own weird fire cat wrestler thing, working in a litany of crowd-pleasing moves like lariats and moonsaults (and being sure to flex after every one).

That brings the base game's final roster of characters to seventy-frickin'-four, 66 of which you'll unlock as you play. But the lineup doesn't stop there if you don't mind paying a little extra or purchasing early. Nintendo also revealed plans for a DLC Fighters Pass, bundling together five unannounced new challengers to be released by February 2020. The pass will cost $24.99 / £22.49 and will include a new stage and several music tracks for each fighter, as well as a bonus Mii Fighter outfit modeled after Xenoblade Chronicles 2's Rex. You can purchase individual Fighter Sets for $5.99 / £5.39 each if you prefer your DLC characters a la carte.

What about the sixth DLC character? That would be Piranha Plant, the polka-dotted pipe dweller that subsists on a steady diet of clumsy plumbers. Piranha Plant will also be sold as paid DLC after it comes out in February but you can get it for free by registering a copy of Super Smash Bros. Ultimate by January 31, 2019 (which happens automatically if you buy on the eShop, or can be done manually for physical games by pressing Plus or Minus on the game icon in the home screen).

Find out where to pre-order Super Smash Bros. Ultimate and get a good deal on the limited edition console.