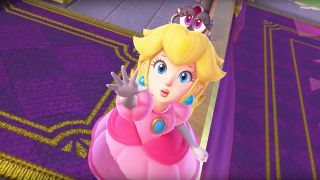 You’d think that after over 30 years of being taken hostage by Bowser, Princess Peach might have thought of some different tactics. Instead of just sitting in her Mushroom Kingdom castle, waiting Bowser to whisk her away against her will, she might have locked the door for once. Or taken up karate? Or simply moved house?

But no. Here we are in 2017 and Super Mario Odyssey starts with Princess Peach being taken hostage once again, and this time round Bowser’s set on marrying her. She doesn’t put up much of a fight. She just stands on the deck of Bowser’s flying boat and screams “Mariooooooo” into the abyss. Maybe she’s got Stockholm Syndrome by now. Who knows? Cue Mario coming to her rescue (again) and having to go on a worldwide adventure in order to do so. Peach, meanwhile, has little choice but to watch the world go by from the confines of Bowser’s ship.

I’ve never been one to idolise Princess Peach. When I sunk all those hours into trying to beat every Super Mario game I could find growing up, I found Peach to be the annoying yet necessary reason for all those games to exist. After all, there wouldn’t be a Mario game unless he had something to save. For 32 years Peach has been playing the role of damsel in distress, with players constantly reminded that the Princess is in another castle, rather than any location of her own choice.

To that extent the start of Super Mario Odyssey made me incredibly angry. Of all the innovation Nintendo has accomplished this year from the Switch itself to games like Odyssey and Legend of Zelda: Breath of the Wild, it’s such a shame that the same couldn’t be said of its long-serving heroine.

But it turns out Nintendo was playing me from the start. Yes, you spend most of Super Mario Odyssey chasing down Bowser and the imprisoned Peach, but the ending and post-game content turns that tradition on its head and proves that Nintendo realises something had to change. Despite her 30 years of damselling, Princess Peach is about to embrace life as a modern woman in a way that came as a total shock to someone who’s been following her oppression from the start.

Once you’ve fought Bowser and made your way out of the secret Moon dungeon where all those weird metal blocks have been coming from, there’s a moment where you think - nay, hope - Mario and Peach might actually kiss. Through all those years of rescuing, turns out Mario’s never gotten his girl. But it doesn’t happen. Instead, ignoring everything that Bowser has put her through, he and Mario decide now’s the time to fight for their lady.

As they both thrust flowers in her face, Peach does what I thought she’d never do; turns them both down and walks away. In about two minutes, Peach shrugs off all those years of being the damsel in distress to forge her own path in the world as a single woman. And one not indebted to Mario for saving her; she doesn’t owe him anything. She does, for all intents and purposes, go missing. She abandons her life in the Mushroom Kingdom, leaving the Toads in a massive panic, in search of her very own adventure. One that she takes on her own terms - a trip around the world.

While Mario is initially impressed by each new Kingdom he came to on his quest to save Peach, it quickly becomes apparent that each one is merely a sponge from which to wring Power Moons. But for Peach, the confinement that she’s faced means every world is fascinating, even if it represents some painful memories. Heck, she’s even brave enough to make her holiday extend to Bowser’s own castle, where she states that she “thinks it’s my first time here on my own two feet”, which might be the saddest thing ever.

Following Peach from world to world long after the credits have rolled is one of the most rewarding things about Super Mario Odyssey. Listening to what she learns and the questions she has about each Kingdom is a beautiful thing. “To think this huge stone thing could float!” she says of the upside-down Pyramid of the Sand Kingdom, while in the Lake Kingdom she can’t decide whether the people or the architecture are lovelier. She’s not travelling to fill her pockets with coins or Moons, she’s discovering her independence for the first time in 30 years.

Nintendo allowing her to go on this journey of self-discovery is clear recognition of its female fanbase. Its new-found ability to round out characters that we’ve known for so long is an impressive feat. It’s something that started with showing Zelda’s fragility in Breath of the Wild and has finished with the unexpected evolution of Princess Peach. Let’s just hope Nintendo doesn’t take a step backwards with the next Super Mario game - whatever that may be. I’d hate to see this new, modern, Peach reduced to a damsel in distress once more.