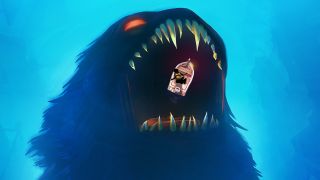 Us humans are social animals. Whether you're an introvert or an extrovert, we all tend to go a bit stir-crazy when we haven't interacted with other people in a while. That loneliness is a universal language. Sea of Solitude explores this loneliness, having it – and other garbage emotions like self loathing, shame, and intrusive thoughts – manifest as big, sludgy monsters in a mysterious flooded world. Cornelia Geppert is the mind behind Sea of Solitude and she has a string of titles that describe her role at Jo-Mei Games, the studio creating Sea of Solitude: she's CEO, writer, and both the creative and art director. I got hands-on with Sea of Solitude at E3 2019 and spoke to her about the game, its monsters, and those garbage emotions we all suffer with from time to time.

It was 2014, and Geppert was stuck. Work had her struggling "with the direction we went with the company. I wanted to create art games, but we were stuck in free-to-play games which brought good money but it couldn't fulfil me as an artist," she told me. "So I struggled with what I should do – I call it nowadays a golden cage." Loneliness pervaded her everyday life, but it was when she confronted how she felt by scrawling on a bit of paper that Geppert came up with Sea of Solitude's main character, Kay. "I had a piece of paper, and I was so angry, and I heard about other artists who were so angry that they –" here Geppert mimes scrawling on a piece of paper with a frustrated growl – "and there was this big black blob. I turned it step by step, like, ok this is the emotion I want to tell," she told me. All of her loneliness and internal conflict became who we now know as Kay, the protagonist of Sea of Solitude. Then the game was born.

Sea of Solitude is a puzzler at heart, as you sail across its world on a motorboat, trying to figure out how to bypass (and sometimes help) the monsters in your way. Using a flare as a guide, Kay has to find the corruption in each area and dispel it by illuminating it with a beacon of light, revealing what's hidden under the black gunk which'll help her fight, or at least understand the creature preventing her from progressing. Getting there requires some inventive thinking as, unsurprisingly, those monsters aren't particularly enthused about being helped out. But Kay doesn't die when you fail. Instead she respawns near the area, gently coaxing herself to calm down, to try again. It's a small detail, but hearing Kay console herself for failing is surprisingly calming. I felt less like I'd messed up and more like I'd learnt something after experiencing a minor setback.

While getting to the corruption is easy at first, gradually you'll find more and more obstacles placed in your way. That could be the swimming monster seen in Sea of Solitude's trailer, the one who tries to eat you when you swim in the water, or phantoms of young boys that chase you whenever you get close. Avoiding and outsmarting them is stressful, but that's the idea. To face them you have to be patient and calm, as impatience leads to failure. Fittingly the phantom boys who chase you are representations of kids who used to bully a young boy mysteriously linked to Kay and her life as a human, meaning that you're not just dealing with Kay's demons, but ones that she might not have realised existed for her friends and relatives. It's a fitting commentary on how both bullying and mental illness can go unnoticed by those closest to the victims… just writing that makes me feel horribly sad inside. Anyway, the bits of the game I got to play were relatively easy, so hopefully they get more difficult as time goes on. Otherwise there's the risk Sea of Solitude might unintentionally feel like a (yet undeniably beautiful) walking simulator instead of an adventure-puzzler.

Get ready to sympathise with monsters

However, Kay is no different from the other monsters in Sea of Solitude. She has the same black feathery fur, the same glowing red eyes. Yet that red glow isn't supposed to be menacing; Geppert tells me how that shade of scarlet is "the passion that's still inside, to be expressed when she opens her mouth … When she opens her red eyes it's the fire that's still inside, [which symbolises how] she wants to move on and go on and change." Although Kay is very real, the monsters she meets are metaphors for her own demons: self-loathing, intrusive thoughts, and sadness are some of the emotions the creatures I met seemed to symbolise. Sadness was a giant bird that literally flew away from anything remotely threatening; self-loathing took the form of a girl hiding underneath a spiky shell (making her kind of look like Pokemon's cloyster), and although I'm not quite sure what the swimming beast in the water was, it definitely wasn't kind.

Confronting these creatures actually feels like Kay confronting her own flaws, as these aren't purely evil beings. They cry out in pain and shock when you point light at them, speak to you with their distorted voices, and altogether act like humans that happen to be in monstrous bodies. Plus the bird-like one feels like it needs to be saved rather than battled, which is wholly intentional; Geppert tells me that each of the monsters suffer from "other types of loneliness [that are] represented by their appearance, but the appearance of them shows what they want to do, how they want to cope with this type of loneliness they have. All of this meaning I have mixed into the design of the monsters."

The best upcoming games of 2019 (and beyond)

So the bird might want to fly away, the girl in the shell – despite the horrible things she says to Kay – looks like she's built up walls around her to protect herself from something or someone. Despite how these creatures look, and despite their sharp teeth and sharper words, Geppert tells me how she hopes that players will be "at first intimidated [by the monsters] but then figure out what they actually mean and how you can interact with them in a good way." In Sea of Solitude, facing your demons isn't enough: You have to help and understand them too.

With cel-shaded surroundings like The Legend of Zelda: Breath of the Wild, you can't deny Sea of Solitude's beauty, even when it's raining, when there's a monster chasing you through the ocean, or as general doom and gloom saturates the air. At the game's heart is a story almost any of us can relate too, as Geppert tells me, "it's also very unique but very common nowadays, this type of loneliness, and people are shocked when they hear the dialogue" coming from the monsters.

The things that they say is all too familiar for anyone who's had those moments of self-doubt, or suffered from imposter syndrome. "I want to tell a human story, almost everyone at some point in life at least at some point in life has suffered from [intrusive thoughts and self doubt]", says Geppert. In her eyes the lessening stigma around mental illness is "like a worldwide movement that we need to be more open about, and not pretend that everything is fine. This is a huge side of being human we have, and we cannot show only this fake 'everything is fine' or extreme other side. This inbetween, like everyday loneliness or everyday struggles … is also part of being human."

Sea of Solitude comes out on July 5, 2019, so you won't have to wait long to try it out. If – or when – you do, just remember that you're not alone if you find yourself recognising Kay's monsters a little too easily, as Geppert has been there before. Sea of Solitude is hopefully going to make a lot of people feel a little less alone.

If you want to know what else you should play this year, here's the new games of 2019, or look below to see what's going on this week in the world of movies, TV, and games!