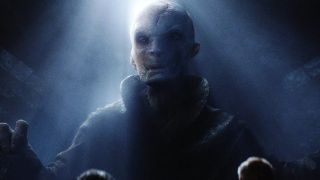 Supreme Leader Snoke appeared only as a huge CGI hologram in Star Wars: The Force Awakens, but a new rumor indicates that he'll have a more physical presence in Star Wars 8. According to MakingStarWars.net, Snoke will take the form of an intricate 7-to-8 foot puppet in at least one scene.

Bringing the mysterious (and super intimidating) head of the First Order to life on set sounds like a big undertaking; according to the rumor, Snoke's puppet requires several people to operate, including one inside the mechanism itself to allow for evil ambulation. Snoke does everything evilly, as you well know. But if J.J. Abrams and company went through the trouble of making a real-life-rolling BB-8, it wouldn't be a stretch for them to do the same for the big bad.

What we don't know is how big of a role Snoke will play in the events of Star Wars 8. But if the puppet rumor is true, we'll likely see more of him than we did in The Force Awakens. And until then, the internet will keep feverishly speculating about who (and what) Snoke actually is.