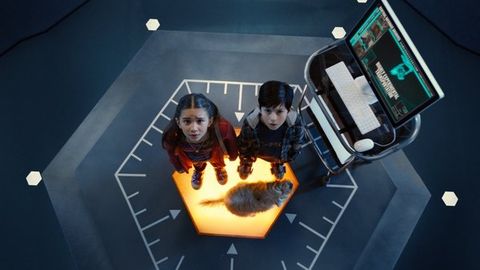 With Spy Kids 3-D: Game Over (2003), Robert Rodriguez showed Hollywood that 3-D was bankable. But even the most cash-hungry studio exec will probably turn their nose up at his latest gimmick.

Not since John Waters’ Polyester (1981) has a film come with scratch’n’sniff cards; though, disappointingly, all eight odours here (from sweets to baby puke) smell like bubblegum.

Unbeknown to them, their stepmum Marissa (Jessica Alba) is a secret agent at the Organisation of Super Spies (OSS), run by the suave Danger D’amo (Jeremy Piven).

Oh, and she’s aunt to the original Spy Kids. With us? Good. Because the evil Timekeeper is out to speed up time. Shit-ake mushrooms, as the kids might say.

Assembled with the usual hair-brained energy, Rodriguez makes one formula change – pruning back the bundles of gadgets in favour of Argonaut, a talking robotic dog.

Were he not tiresomely voiced by Ricky Gervais “with an English accent, like James Bond”, it might’ve worked better. Fortunately, the day-glo FX and cheap’n’cheerful plot see us through.