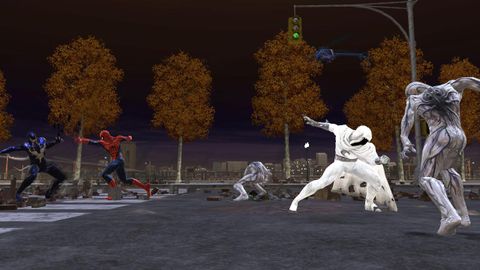 In the last “real” Spider-Man game, Spider-Man 3 (we’re ignoring Friend or Foe), developer Treyarch somehow managed to turn swinging freely through New York and beating up thugs into a dull chore.Spidey has a lot to prove this time around, but Web of Shadows successfully brings the wall-crawler back to his glory days… mostly.

The story focuses on Spider-Man and his amazing friends (and enemies) as they fight to free Manhattan from an invasion of alien symbiotes, which are all somehow connected to Peter Parker’s nemesis, Venom. At the same time, Spidey deals with some moral crises stemming from his use of his old black costume, which you can switch with his classic red-and-blue suit at any moment. It makes for an interesting story, but one that’s no deeper than an eight-issue comics storyline.

Ever since Star Wars: Knights of the Old Republic, store shelves have been lousy with games that focus on choices between evil or good, a mechanic Web of Shadows uses throughout. The choices come small, like saving a civilian or beating a thug excessively, and big, like choosing to make out with the Black Cat or be true to Spidey’s wife. This makes some moments more dramatic than they'd be without the choice, but those moments generally come off as gimmicky additions that don’t really change the narrative.

Still, the choice between Red or Black Spidey is a little more immediate when it comes to the combat system. Each costume has its own combat style, complete with unlockable combos and attacks. These are bought with experience points gained from completing missions and beating up fools, and each attack you purchase will open up access to more attacks in a nice branching system. Assuming you’ve undertaken a fair share of the game’s optional missions, you’ll probably have them all unlocked by the time you near the end.