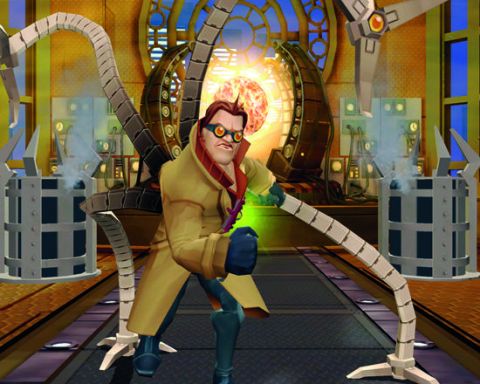 With the ability to beat-and-greet many of the familiar faces orbiting the Marvel-verse, Spider-Man: Friend of Foe would have you believe that it's a punchy fan serenade that'll make a nation of gamers forget about the disappointment of thelast Spider-Man game. Instead, it's a brawler of very little substance that, quite irresponsibly, squanders Spidey's great power (reference #1).It's really more of an insult to the people who love the little web slinger, and will only appeal gamers too young to realize the extent of which Spider-Man 3 sucked on toast.

Aliens have descended upon Earth with symbiotic goop to... oh, it doesn't matter. Just know that old grudges have been set aside, and you'll get to partner up and play as nearly 20 of your favorite Spider-Man characters from the hub of Nick Fury's Helicarrier. It plays very similar toJustice League Heroesbut with more villains and far less dignity. Even though the Columbia Pictures' torch-bearing damsel opens the game, gone is the angst-ridden Peter Parker of the last three films. Spidey's filled with Saturday Morning 'tude with moves and cornball one-liners to match. Two heroes will battle swathes of, somewhere aroundthree enemies per level in global environments such as Tokyo, Egypt, and why not, Transylvania.