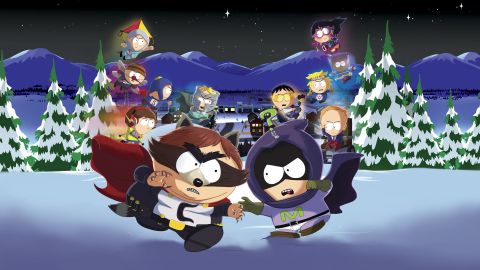 South Park balances ample fan service with gameplay that stands on its own merits and an engaging story. It won't make you a fan if you weren't one already, but it's hard to imagine a better-realized adaptation.

Way back in 1998, Acclaim Entertainment published the first South Park video game for Nintendo 64. It employed plenty of funny jokes, but was wrapped around lackluster first-person shooter gameplay and uninspired level design. In the ensuing years, multiple companies would attempt to produce their own version of an interactive South Park experience, to varying degrees of success.

2014's South Park: The Stick of Truth was the first glimmer of hope for fans, bringing together creators Trey Parker and Matt Stone with Fallout: New Vegas developer Obsidian. As a vessel to deliver South Park-branded yucks to games, Stick of Truth was supremely enjoyable. As an RPG, it fell a bit short.

Now, nearly 20 years after that first attempt and three years after Stick of Truth, Ubisoft has finally created a South Park game that's as fun to play as it is to laugh along with in South Park: The Fractured But Whole. Gameplay and humor are mixed in equal measure, and the result is the truest, best adaptation of Trey Parker and Matt Stone's juvenile comedy series ever produced.

South Park: The Fractured But Whole improves on Stick of Truth in nearly every way. For starters, it's a more polished experience, even with a small number of few bugs popping up during my playthrough - one caused my character to face the wrong way during a cutscene while another crashed the game mid-combat, though I was able to return quickly and not lose progress.

The story is improved this time around as well. While things start slow, the game ramps up and becomes an intriguing mystery featuring the return of one of the show's best villains. It's also more coherent and grounded than Stick of Truth, even as the children face off against Lovecraft gods, travel through time, and find religion at the bottom of Stark's Pond with Seaman and a gay fish. There's less reliance on knowing inside jokes and more setups that are enjoyable on their own.

Leveling up is now more freeform, allowing you to mix and match powers from multiple hero classes. By the end of the game, I was able to shoot fireballs like a Blaster, throw knives like an Assassin, and reposition my enemies with a dragon kick like a Martial Artist. And since all of these powers are tied to your character's DNA, you're able to play dress up however you like - no relying on visible gear to give you stat boosts.

Combat has likewise been expanded from a simple Paper Mario copycat into a more robust grid-based system where positioning and timing are important, and a wider variety of enemies will challenge players to stay on their toes. A support-type enemy might shield his foes from physical harm, leaving you to rely on your ability to debuff them and add status effects like Bleed and Burning. A 6th-grader might toss a water balloon full of piss onto your team, forcing you to either scramble out of the way or be prepared to heal the Grossed Out status so you can survive the fight. It's far more dynamic and enjoyable, since you can't just spam one attack and win, even once you become uber-powerful.

You can still summon in powerful allies as in the previous game, and their introductions are even more ludicrous than before. A stripper can be used to run people over in her car, or Moses (yes, that Moses, though in South Park he's a virtual entity designed to reference Master Control Program from Tron) can be called upon to heal all injured allies. My personal favorite though has to be Gerald, who swoops in high on cat piss in a reference to the South Park episode "Major Boobage".

Boss fights are a particular joy, with each one focusing as a climax to a major plot point while throwing out some fun wrinkles to the usual combat. I'll stay away from late-game spoilers, but one early example has an obese stripper chasing you down as you fight a horde of other exotic dancers. You can't get around or avoid the boss, and she unleashes a one-hit kill attack based on a timer instead of taking a turn like everyone else - this means it's a race for you to deal damage effectively and cuts down on your ability to patiently strategize.

Another unique fight flips this, so that players need to focus the boss while additional minions are constantly being spawned in, all while the timer system is used to introduce environmental hazards and restrict movement. My personal favorite involved a boss that could not be targeted directly, but instead needed to be tricked into attacking its allies. Standard combat is far more fun and varied than Stick of Truth's thanks to the grid and focus on positioning, but the boss battles show how versatile and creative the development team are this time around.

Our pick of the best South Park episodes of all time

Meanwhile, little has changed in the town of South Park itself. Kenny's house has been gentrified and subsequently abandoned in the SoDoSoPa district, and Shi Tpa Town classes up Skeeter's Bar and Jimbo's Guns (now with locally sourced firearms), and a Memberberry farm awaits on the road to Canada. Even with these additions and a few areas blocked off until you power up your farts, you'll still be able to see a large majority of the map within the opening hour. There are only three main streets in this quiet mountain town, after all.

Despite the relatively small map, it can feel at times like Fractured But Whole has a case of 'Ubisoft Syndrome,' where there's too much to do or keep track of at any given time - but hey, at least there are no radio towers to climb, and the collectibles themselves can earn a chuckle from fans who recognize the inside jokes. Memberberries, for example, are not only a reference in and of themselves to season 20, but they also say things relating to past episodes, the previous game, and culture in general, ie. "'Member when Canada was like an old-school RPG?" "Ooo, I 'memba!"

Whether it's talking, nostalgic berries or pictures of prepubescent boys locked in loving, anime-style embrace, Fractured But Whole makes its scavenger hunts fun. I just hope none of my neighbors have heard me loudly cursing "I need that damn yaoi!" late at night.

South Park: The Fractured But Whole guide: everything you need to know to be a heroic New Kid

Since this is South Park, it should be obvious that the... shall we say 'unique' brand of humor is bound to ruffle some feathers. From politics to gender identity, PC culture to right-wing rhetoric, seemingly everyone gets burned by Matt Stone and Trey Parker's writing to varying degrees. The aforementioned gay fish's mother looks undeniably as though she's wearing blackface. A racial slur is used. In its most uncomfortable moment, a boss fight features a pedophile attacking the children in a way that alludes to forced oral sex.

That said, it feels like there's less emphasis on gross-out humor and being as offensive as possible, and more jokes out to serve the story or to make a point. Early in the game, the South Park police ask you to bring in a drug peddler - of course, by the time you get to the suspect's house it's clear that he's not a criminal, and is being prosecuted by police simply because he's black. Later on the police admit as much, and give the real reason for targeting African-Americans (which I won't spoil here).

PC Principal teaches you how to recognize microaggressions and literally calls you a 'social justice warrior,' but there's no denying that his tips come in handy - every time an enemy says something demeaning or belittling to a particular demographic, you get a free chance to attack. These aren't the type of jokes to make you really give your life pause, but they're often deeper and smarter than you may think.

At least until you summon a party member so he can shove a handheld sandblaster tube up your anus and you use the pressure of your farts to blow away debris. I wouldn't look too much into that one.

South Park: The Fractured But Whole

South Park balances ample fan service with gameplay that stands on its own merits and an engaging story. It won't make you a fan if you weren't one already, but it's hard to imagine a better-realized adaptation.