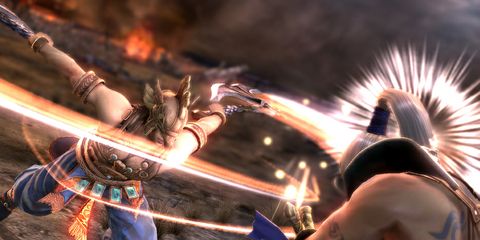 Building up the meter

Soulcalibur V feels like a fresh start for the franchise, and that’s not just thanks to its new cast of combatants. The Soul Gauge has given way to the Critical Gauge, a two-tiered meter that falls in line with similar features in other fighting games. You can use it for features such as Brave Edge, which allows you to add a bit more spice to your combo for more impact, but at the cost of some of your Critical Gauge. Also, Critical Finishes, introduced in SC4, have been pared down to Critical Edge, which allows you to execute a dramatic ultra combo sequence, but it doesn’t immediately end the round.

There are subtleties at play that tournament-level players will dig for that the average fighting game fan won’t nail down immediately, such as a Street Fighter III: 3rd Strike-like parry system, known as Just Guard. It has less meter-cost than the Guard Impact system (which returns from SC4), and for those who master it, it’ll likely serve as a tactical linchpin.

A more apparent addition for any player is SC5’s introduction of a dashing side step that allows you to get to your opponent’s vulnerable side a bit faster than before. It’s a great feature that lends a quicker pace to fights than in prior games. The combination of new fighters, and the speed of battles makes for an experience that evokes the chaotic fun that made Soulcalibur II a favorite for both competitive players and the average gamer.

It’s often tough to gauge the netcode for a fighting game on launch day, so we can’t guarantee that your online fights will clip along at fluid pace, but the social features, such as the Global Colosseo, add a nice touch. The Colosseo is a lobby set up for local players to hang out and set up matches. If you live in a city where there are organized meetups, it might not be as useful, but in case your local area doesn’t have anything in place, it could be useful. For what it’s worth, the matchmaking and games we played flowed smoothly and we didn’t encounter any lag.

Soulcalibur II? Not quite. With the nostalgia glasses on, SC2 wasn’t just a fighting game for competitive players, it was accessible for the masses and was simply loads of fun. It’s a different time and era in gaming. In its defense, SC5 comes closer than any other game in the series since.

With its increased pace, defensive tweaks, and reincarnated fighters, Soulcalibur V feels like a sorely needed reinvention for a series whose formula has gotten too long in the tooth. It feels as accessible and nearly as entertaining as Soulcalibur II and soundly one-ups its HD predecessor. You won’t realize how much you wanted this revamp until you’ve put in a few hours on the arcade sticks.