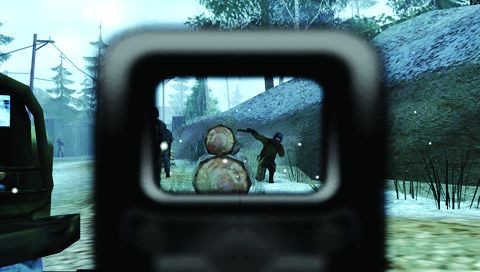 It’s polished, we’ll give it that – but that’s to be expected from a series that’s been consistent in delivering solid tactical shooters for many years. Unfortunately, just as in SOCOM’s last outing on PSP, you can’t help shake the feeling that this is a great game that would have been better on a different console.

As ever, the PSP’s lack of a second analogue stick ruins the party somewhat. Our brains are well trained in the dark art of dual analogue action on bigger consoles, so playing Fireteam Bravo sometimes feels like driving a car with one arm tied behind your back.

In fairness, the developers have had a pretty good stab at getting a range of control options to fit. Hold down L to strafe, use R to lock on and use the D-pad to toggle manual zoom and aim. On top of that you can still order your three teammates to fire at will, move to waypoints, hold their position and so forth.

It’s a commendable setup as long as you take your time over things, but the minute the action gets frantic, the second you’re caught in the open by a bunch of guards while your scope is up, you inevitably end up fumbling and, particularly on tougher settings, eating a face full of lead. Frustrating for sure, but at least SOCOM has the decency to pace its checkpoints sensibly.

There’s a seemingly endless amount of weapons to earn in Fireteam Bravo 3 – you’ll unlock a decent amount just by working your way through the single-player campaign. You can also earn Command Equity (a point system that carries over from the last game) where, by completing primary and secondary objectives, you earn currency to buy more kit.

Where the game really excels is in its range of content. For starters, the single-player campaign, though pretty derivative (Black-Ops, renegade Russian state, weapons of mass destruction), is enjoyable in its own right. Combat can be really satisfying, especially when you overcome multiple guards with some cleverly selected squad commands – and it really blossoms if you ramp up the difficulty or play in co-op.

There is also a wealth of multiplayer options here that would make many console shooters look inadequate: 16 player competitive matches with a good spread of game types and even a custom mission mode that lets you tweak maps to play in different ways. Despite our initial misgivings about the controls, you really can’t argue with what’s on offer here – making it one of the best PSP shooters we’ve played in quite some time.