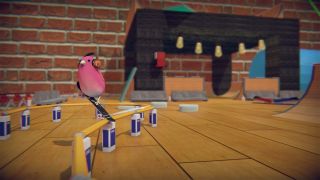 It's been ages since we've seen a good version of  Tony Hawk Pro Skater on modern consoles, or any great skateboarding game for that matter. Both The Birdman's famous franchise and Skate haven't seen a quality new entry in years and attempts at recreating the magic found in those series have mostly fallen flat. Heck, we're still waiting on Skate 4.

Skatebird is trying to change that. Created by Glass Bottom Games, Skatebird is a game about "trying your best" while rolling around a toy-sized skatepark hitting awesome tricks as a bird on top of a board.

Megan Fox, the founder of Glass Bottom Games, launched a Kickstarter with the rest of team her earlier this month that has already reached double their set goal ($40,000 of a $20,000 goal with a lot of time to spare).

SkateBIRD is a game about birbs who try their best, and we need YOUR help to teach them to skate real good. (alpha demo inside!) https://t.co/VFjWPc96IZPLZ RT! Share with your birb friends! BIRB🐦NEEDS🐦YOOUUUU🐦 pic.twitter.com/ZAifEoClm2June 11, 2019

There is a demo for PC, Mac, and Linux available for download on the Kickstarter page, so jump in if you're interested in seeing how Skatebird compares to other games like it. It's not a final product, so expect some bugs when trying to land that shove-it.

You can see more from Skatebird in the trailer below.