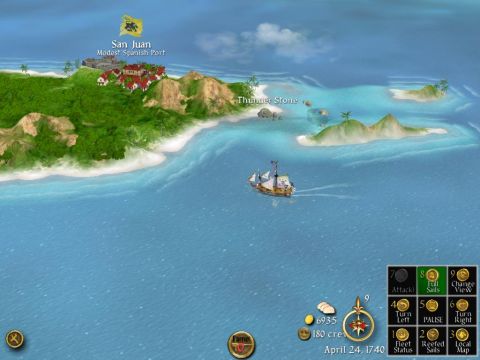 Few things are more aggravating to write about in this line of work than bad ports, but when it happens to a bona fide classic such as Sid Meier's Pirates!, a review becomes less of a review and more of a public service. The swashbuckler simulator in question originally saw its release on PC in 2004, and after a great port on the original Xbox in 2005 along with a surprisingly well-executed run on the PSP in 2007, 2K decided to give the old girl one more go on the Wii. Unfortunately, 2K China has delivered the least appealing version of Pirates! to date, and while incessant waggling along with frequently annoying load times can't completely ruin the game's undeniable charm, they sure do come close.

Above: And there's our hero standing triumphantly, still looking about as un-pirate-like as feasibly possible

The nicest compliment one could give to the Wii port of Sid Meier's Pirates! would be that it consists of Sid Meier's Pirates!. This is still the same supremely well-designed game that puts you in the boots of a strapping young lad looking to make a name for himself in the pirate business while restoring his family’s honor throughout the Caribbean during the piracy heyday of the mid 1600's.

You will do this by participating in the many daily errands a successful pirate would do. Building your crew, searching for buried treasure, partaking in naval battles with rival pirates, and winning the heart of a young maiden with your ballroom dancing skills are just a few of the multitude of things available to do on the outset of your personal pirate adventure.

All of your nefarious deeds are set in a distinctly delightful take on pirate lore. Sid Meier's version of piracy leaves out all of the bits about pillaging defenseless villages and syphilis in favor of a bright, cheerful, and family-friendly world full of Simlish-speaking inhabitants and consistently upbeat atmosphere.

Above: Ship-to-ship combat is still the highlight of the game, even in a crappy version

These load screens weren't anywhere near as frequent on PC as they are here, and the PC version also has the capability to look decidedly better. Sid Meier's Pirates! on the Wii features muddy, drab textures and lower-resolution character models when compared to its older brother, and the framerate can dip to critical levels when multiple things are happening on screen at once. The Wii is more than capable of running Pirates! at a higher clip than this.

The Wii version does get some added bonuses on top of the previously mentioned graphical hiccups. It wouldn't be a Wii port without some tacked-on and poorly implemented motion controls, and they're in full force here. Sword duels are now controlled with mandatory swings of the Wiimote, but Red Steel 2 this ain’t. The game will interpret a thrust as a slash, leading to a swift turning of the tides in your enemies’ favor. We’ve already seen Pirates! control just fine with a normal controller, so why not throw in classic controller support? Wii owners will also be treated to a couple of new minigames specifically for this version. Bombardment is a simple enough game where you point and aim at the screen to give your foes a cannonball to the face, and the new lock-picking minigame is about as fun and exciting as just about every other lock-picking minigame you've ever played.

Oh and a buddy can plug in an extra Wiimote and control the angle of the sails on your ship in accordance with the wind. Sounds like a hoot.

Quite possibly the most egregious part of the whole package would be the price. 2K wants you to cough up $40 for the worst ever version of a six-year-old game. Furthermore, the PC version of the game is readily available on the bargain racks of mega retailers everywhere for $10, and even the cheapest of modern day laptops can run it by this point. Sid Meier's Pirates! can still be somewhat enjoyable even in this current incarnation, but with far cheaper, far better options at your disposal, it's probably best to ignore the Wii version's existence altogether.

Above: So how does becoming a high-ranking member of the British military make us more appealing to unemployed pirates?

Still, the lacking port and absurd price wasn't able to fully mask the smell of awesomeness Sid Meier's Pirates! continues to reek of, so take that $40 and do the following: Head to your local PC game bargain bin and find a copy of Pirates! laying near the bottom for $10. Right next to this PC bargain bin should be a Wii bargain bin, where you will be able to get your Wii's needed dose of swashbuckling with a copy of Zack & Wiki. Across from these bargain bins might be a DVD-filled bargain bin, so get yourself a copy of Hook on DVD while you're at it, and you should have enough cash left to procure some type of tasty sandwich. $40 later, you'll be staring at one of the best pirate-fueled weekends humanly possible, and it won't involve Sid Meier's Pirates! on the Wii.