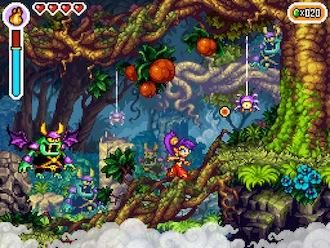 The original Shantae for the Game Boy Color was remarkable for a number of reasons. For one, it was created almost entirely by a single man - Matt Bozon, and published by Wayforward. It looked great and played wonderfully, and created an engaging new mythos in which gamers could enjoy some tight platforming goodness. Some things never change.

Shantae: Risky’s revenge is a sequel that’s been 8 years in the making, and finally found its way to Nintendo’s handheld via DSiware. At 1200 points, it is unequivocally the most expensive item on DSiware. The shocking part? It would have been worth the money at twice the price.

The setting is simple. In the mystical world of “Sequin Land” (a distinctly Arabian-themed universe where everyone wears parachute pants), the thriving port city of Scuttle Town is protected by one woman: Shantae, the mystical half-genie. Everything’s going along just fine until Shantae’s old nemesis, the pirate villainess Risky Boots (not even close to the most ridiculous name you will hear in the game) shows up to steal a newly-recovered treasure from the town - an oil lamp. Shantae’s uncle warns our protagonist that if Risky Boots were to obtain all three magic seals, great darkness would befall Sequin Land. Shantae vows to beat her to the punch, and sets off to find the seals herself. It’s your standard MacGuffin-fuelled adventure game, and the vast majority of your time is spent gathering the magic seals.

While it may seem like the formula would lead to a standard gameplay experience, Risky’s Revenge actually manages to throw some interesting curve balls your way. Not only is Shantae herself armed with a variety of magical spells (which can be bought and upgraded at the store in Scuttle Town), but being a half-genie, she has the ability to do a belly dance and transform into several different creatures, such as the elephant, which can smash through stone blocks like they were made of wicker. As you gather more forms, you can go back to previously visited areas and access new parts of them, lending the game a very Metroid feel, at times. The only niggle in this regard is that sometimes it’s uncertain where exactly you need to go, as the map is a very loose guideline. We spent a half hour looking for a specific person who we knew was in a specific area, but couldn’t find the right door. These instances aren’t common, though.

Even better than the great gameplay are the aesthetic qualities of the game. The animations are silky-smooth, and the soundtrack is of higher quality than some major console releases. If every DSiware title looked and sounded like this, we wouldn’t mind paying these kinds of prices.

Shantae: Risky’s Revenge is the perfect platformer. It’s proof that the 2D side-scrolling formula still holds up after all these years. The characters are fun and quirky, the story is weird and loose, and the game as a whole is a pleasure to play. If you were waiting for this year’s “must-have” app from DSiware, look no further.