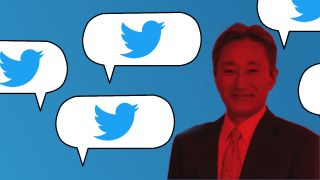 In February 2011, thousands of new Twitter accounts were born - but one of them was special. A parody account would go on to amass 116,000 followers and secure a place in the hearts of gamers and game makers alike.

The president of Sony, Kazuo Hirai - former president of Sony Computer Entertainment - doesn't have a Twitter account, but he doesn't need one. The parody account @KazHiraiCEO is there to offer a mischievous take on all the big gaming news on his behalf.

Kojima has officially left Konami. He is officially the last exciting thing that will ever be released by Konami.December 15, 2015

Last week, @KazHiraiCEO, AKA Fake Kaz Hirai, put out a statement saying all that would come to an end after E3 2018. We spoke to the person - one who has never revealed their true identity beyond their location in Manchester, England - about how it all started, getting mistaken for Sony's actual CEO, and why his decision has made his mother mad.

GamesRadar+: What's been the strangest thing that has happened to you as a result of the account?
Fake Kaz Hirai: I think the most surreal moment for me was when they showed some of my tweets on screen behind the real Kaz at Sony's 2016 CES event. Up until that point, I had no idea he was even aware it existed, so to see my account on the same stage as him at a real Sony event was bizarre. The tweets were pretty critical of Sony, which made it stranger; there was even one about the Sony hacks. When I tweeted out the screenshot, a lot of people just assumed it was a photoshop for a joke.

Here at CES I was able to show Sony’s most exciting product of the last 5 years: My Twitter account. pic.twitter.com/uQyWAQiMedJanuary 6, 2016

Other than that, it's all the people who still tweet at me thinking I'm Kaz. I mostly get people asking me to fix their Xperia phone (which is obviously not the CEO's job), but I got a lot of weirder things as well. You get inventors pitching products and people inviting Kaz to invents, as well as a surprisingly large number of disgruntled Andrew Garfield fans who still want an Amazing Spider-Man 3.

Did you enjoy seeing it grow and grow? Or did that add pressure?
I definitely enjoyed it, but it did add a little pressure. I can't delete a typo or a terrible tweet before people see it. It also meant I couldn’t experiment as much. For example, I used to do Q&A sessions on Twitter in character. I liked doing them, but that sort of thing becomes a bit unwieldy when you have a lot of followers. I also became a lot more conscious of not wanting to saturate people's feeds.

That said, the advantages far outweigh the disadvantages. It is a lot more fun seeing everybody's reactions when you have a lot of followers, especially during the big events like E3.

Were you ever worried about Sony's response? Have you ever heard from its lawyers about it?
I wasn't worried as such, but I was always aware that it could have shut it down at any point if it wanted to. Nintendo always does it when a Nintendo parody account gets popular. Eventually, people who are fairly high up in Sony started following and replying to me, which was when I knew I was probably safe. All the responses I’ve seen from Sony people have been positive. Though that doesn't stop me from thinking "God, I hope Shu doesn't read this" when I tweet something more critical of Sony.

I haven't heard from Kaz directly, but a British tech journalist asked the real Kaz about it. Apparently it was his lawyers who told him it existed, but he chose to do nothing about it. He said that other people in Sony had told him "it was funny in a good way."

Will you miss Fake Kaz when he's gone?
Yes, for sure. I think it'll hit me when I see a video game news story ripe for jokes. I'll think of a joke and I’ll have nowhere to post it, which was why I started the account in the first place.

I'll also miss being able to interact on Twitter with some of the bigger names in gaming. This is something I will definitely not be able to do without the account. Even if I was able to, I certainly couldn’t get away with saying some of the things that 'Kaz' does!

Do your friends and family know about the account? What's their reaction?
Some of my friends know about it, but a lot of them don’t. Some of them think it's cool, but others don’t really understand why I do it.

My parents are way more into it than I am. They often bring it up when we are out with family, which I naturally find profusely embarrassing. Mostly because I then have to explain what Twitter is, what a parody account is, who Kaz Hirai is, and how any of the tweets my mum makes me show them are meant to be funny. My mum is still annoyed that I chose to end it.

Almost nobody at works knows it exists. That’s mainly because I don’t want my boss to know if I'm awake at 4am tweeting on a weeknight.

On the Switch Mario has two nipples exactly where you’d expect them, whereas on the N64 he had one nipple placed awkwardly in the middleSeptember 14, 2017

Why is it important to you to stay anonymous?
It was never a conscious decision, I just never felt the need to put my name on it. At this point, I enjoy watching the speculation about who I am. I know the answer is way less interesting than everybody else’s theories, so I think it's more fun for everyone to just let them speculate.

What have the responses been like to the news that you're going to stop tweeting?
The sheer volume of the response was far beyond what I expected, and infinitely more than what I deserve. I have received thousands of messages, and 99.9% of them have been incredibly nice. Having people who have followed me for years tell me how much the account meant to them, and that they were going to miss it, actually made me feel really proud. I honestly didn't know if anybody would've genuinely cared, and I don’t think I would've ever known if I hadn't chosen to end the account.

I also found it hilarious that there are news articles about it. They all said I was announcing my “retirement” which makes it sound like I’m some industry veteran quitting the business, not just some random person who tweets PS Vita jokes.

How will you mark your final E3 as Kaz?
Honestly, I have no idea! But it will be fun, I’m sure.