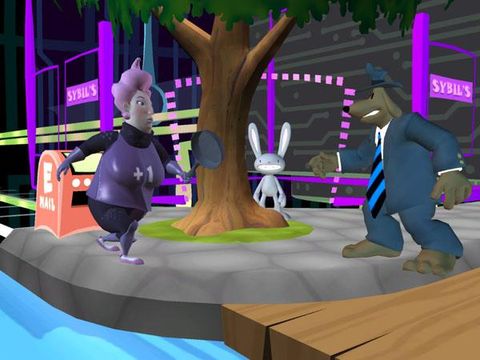 After a 13-year absence from videogames, amoral dog-and-rabbit crimefighting duo Sam and Max made a triumphant comeback in late 2006, with a series of six surreal adventures that took them from the seediest streets of New York to the depths of outer space. Originally released online for $8.95 a pop, their criminal-squashing escapades have been bundled into one $30 collection and peppered with cool extras, giving those who've managed to avoid the series thus far one less reason to do so.

If you're any sort of fan of point-and-click adventure games, though, you owe it to yourself to give Sam & Max Season One a try. Filled with weird humor and occasional gunplay, each short episode puts you in control of fast-talking, level-headed canine Sam, who's followed everywhere by Max, a violent, hyperactive rabbit wiseass. The basic gameplay is simple: walk around, click on stuff, grab everything that isn't nailed down, use it to solve simple puzzles and chat up anyone who crosses your path with multiple-choice dialogue selections.

While the gameplay holds few surprises, however, the episodes themselves are all over the map; over the course of the season, Sam and Max star in a failed sitcom, destroy the internet from the inside, bring down a cabal of toy-obsessed mobsters and publicly debate a giant robot Abraham Lincoln for the US presidency. Oh, and also destroy a rainbow-barfing megalomaniac who threatens the world with eternal peace and happiness. It's all very silly and absurd, and although the gags aren't always that funny, they come at a steady enough clip to keep even jaded players smiling throughout.

Aside from the six adventures, Sam & Max Season One comes packed with a bonus disc that features trailers, a behind-the-scenes video, character bios, concept art and the series' jazzy score on MP3. The only things missing are the machinima shorts, developer commentaries and a few other extras that developer Telltale produced during the series' online run, although those things and more can be found atTelltale's website.

Mikel Reparaz
After graduating from college in 2000 with a BA in journalism, I worked for five years as a copy editor, page designer and videogame-review columnist at a couple of mid-sized newspapers you've never heard of. My column eventually got me a freelancing gig with GMR magazine, which folded a few months later. I was hired on full-time by GamesRadar in late 2005, and have since been paid actual money to write silly articles about lovable blobs.
See comments
Gaming deals, prizes and latest news