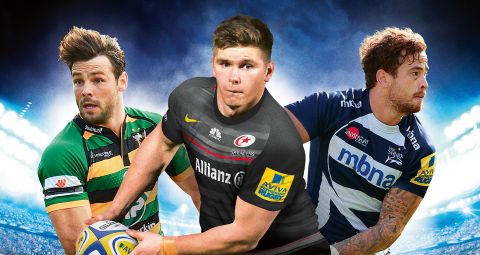 Rugby 15 isn’t just a disappointment; it’s significantly worse than its forebears. The simple stuff is over-complicated, and the basic tenets of Rugby Union are wrong. A nightmare vision of sporting hell.

While Martin Johnson was managing the England rugby team, the press frequently criticised the total absence of flair in his side. Fear of failure, they suggested, was stifling England’s ambition. Considering this, Rugby 15 must have been belched into existence for the express purpose of tormenting Johnson. This is a game where any attack - no matter how creative, deft or fleet of foot - can be smothered with a single tackle.

Because you’re smart, you’ll already have gathered that this is not the rugby game we’ve been waiting for. There’s little excuse for it being this poor. Despite apparent complexities, rugby is simpler than people think: a numbers game based on territory, possession and space. The complicated bit happens at the breakdown, when a player is tackled and teams try to shove each other off the ball. It’s the defining element of Rugby Union. And it’s the bit that Rugby 15 gets monstrously wrong.

Admittedly, the breakdown is violent, complex and contentious - like a crash of 20-stone barristers trying to claw open each other’s scrotums while arguing about technicalities - but there’s a simple truth to it: it’s usually easier to keep the ball than it is to steal it. Unless a player is isolated, the impetus is with the attacking side. The opposite is true in Rugby 15. Once a tackle has been made, players take part in a minigame centred around finding the sweet spot with the analogue stick. When the bar is green, you can win the ball legally; when it’s yellow, you risk infringement. At first it seems like a simple, sensible way of keeping things competitive. The problem is you have to press two buttons to win the ball when you’re in possession but only one when you’re defending. Even on the hardest setting, I stole the ball almost every time; as if I’d replaced my thumbs with the distilled living essence of Tackles McCaw. Conversely, even Manu Tuilagi has the ball-retention skills of a buttered pensioner. It makes for a game of chase-me-peewee hogwash that barely resembles the direct, attritional sport it’s based on.

This fact alone would seriously impair enjoyment for all but the most casual fan, but it’s the mouldering tip of the turdberg. Glaring offsides get picked up by the ref, but minor infractions go unpunished. Laboured animations slow down every attack. This means defending players can rush up and smash you faster than you can offload the ball. This, you remember, is a sport where once-handsome men will develop faces like fire-damaged Lego, all for the sake of precious yards. Most forwards would sooner lose their urinary meatus before going backwards.

Rugby Union is a game built from the muscular foundation of set plays. Scrums in Rugby 15 act like the breakdown - an analogue minigame in which you have to shove your opponent backwards. Understandably, it lacks the devious subtlety of real scrums. Lineouts are a test of timing, where your throw and jump have to coincide. Unfortunately, they’re almost impossible to contest. Rolling mauls work best. Again, it’s the same minigame, but you can add extra players for more grunt. Sadly, pushover tries are a total faff: you have to detach a player and touch down, rather than just collapsing. Bah.

Clearing kicks are almost impossible. You can alter your attacking plays to push players deeper, but it rarely gives you enough time. In fact, kicking is generally wretched. Tight camera angles and binary aiming make it impossible to determine where the ball will go. It’s more tolerable with ball in hand - often because it’s the sole attacking option - but even then, it doesn’t feel right. Whether you’re a flighty winger or creatine-gorged wardrobe, you can still chip the ball like a twinkle-toed fly-half. Mercifully, place kicking works well. It’s basically the standard video game golf swing, accounting for wind and the curve of the ball. That said, kicking stats barely seem to matter. I tested this in the most judicious way possible: by making prodigious England prop Davey Wilson take over boot-duties; a man more famous for having a neck the width of Goliath’s coal shed than his ability to punt a ball. Sure enough, he slotted his kicks over like a supersized St. Jonny of Wilkinson.

Searching for positives is like laughing off a ruptured testicle: “Well, at least I still have another one. And I find children so frightfully tiresome anyway!” There’s an impressive roster of club teams, most of which seem to be bang up to date. For instance, recent Rugby League convert Sam Burgess is in the Bath line-up. But wait! He’s playing in his Rugby League position. Oh, and there’s the small matter of him being a totally different ethnicity. The licence also doesn’t extend to international sides, so players have names which sound like they’ve been ripped from lusty steampunk fanfic. It’s difficult to remain invested in the barbarous spectacle of the Six Nations (laughably called ‘6 Countries’ here) when Crispin Gadabout has just spun the ball out to Rumbelow Henk.

Let’s have a chat about presentation. The short version is that there isn’t any. No replays; no close ups; nothing. You’d find more finesse in a wet shoebox. Stadiums bear little resemblance to their real-life counterparts. The crowds look like cardboard wraiths with season tickets. There isn’t even a whistle. That’s right: a whistle. Games end with a flatulent sigh rather than shrill peep. Blistering, length-of-the-pitch tries are rewarded with little more than a bland platitude from Stuart Barnes. And while the commentary isn’t awful, you should be prepared for recycled lines from Rugby World Cup 2011. There’s a limit to the number of times you can hear Miles Harrison say, ‘chance to move it wide, maybe’. It’s a limit I reached three years ago.

There are so many other things I haven’t had time to talk about: passing is erratic and imprecise. Multiplayer games are a muddled nightmare, whether competitive or cooperative - I played it with a fellow rugby fan and it actually made him angry. Running sideways is more effective than running straight. There’s no online mode. Worse still, it’s full of bugs. The worst example? After grounding the ball for a try, play would often continue. My player would then clamber to his feet and run the ball dead, like Forrest Gump without the chocolates, joy or whimsical, elegiac exploration of modern American history. Preposterous.

Rugby 15 feels like it’s constructed from the fatty offcuts of juicier rugby games which preceded it. Don’t let fervour for the upcoming World Cup sway your judgement: comedically irrelevant national teams and a lack of basic skills mean that this isn’t worth your time. Avoid it like you would a tackle from Brian Lima.

Rugby 15 isn’t just a disappointment; it’s significantly worse than its forebears. The simple stuff is over-complicated, and the basic tenets of Rugby Union are wrong. A nightmare vision of sporting hell.